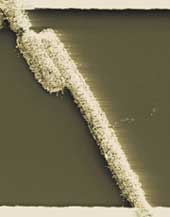 scientists in the us have designed a bioelectronic device exploiting a bacterium's ability to puff up and deflate in tandem with humidity in the air.

University of Nebraska-Lincoln scientist Ravi Saraf and his doctoral student, Vikas Berry, created a silicon chip covered with several extremely fine gold electrodes to which they applied a suspension of bacterium Bacillus cereus. Then they dipped the chip in a solution of positively charged gold nanoparticles, which are attracted by the negatively-charged bacterial surfaces.

The researchers applied a small voltage across the electrode pairs and measured the current generated. They found if the humidity was increased, say, from about 0 to 20 per cent, the current decreased by a factor of 40. The chip reacted so sensitively to changes in humidity because moisture caused the bacterial membrane to swell, which increased the distance between the individual gold particles attached to it, impeding the flow of electrons and, thus, the current.

What is interesting is that the sensitivity of the device increases when the humidity goes down, when other devices don't do well. "In the low-humidity range, our device is a factor of four to five times better than anything out there, in microelectronic devices," he said. The invention was published by the highly respected German journal Angewandte Chemie International (Vol 44, No 41, October 7, 2005).