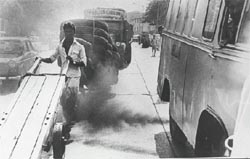 if you have prostate cancer, could puffing a cigarette or breathing diesel fumes behind a bus make your cancer spread faster? That's a question researchers Paul F Lindholm and Andre Balla of the Medical College of Wisconsin, usa, are trying to answer.

Their preliminary research suggests that aggressive prostate cancer cells are different from dormant cells, and that environmental pollutants -- such as heavy metals, cigarette smoke, pesticides or vehicular emissions -- may cause slow-growing prostate cancers to become more aggressive. If they do, they may attack surrounding tissue, and spread more rapidly through the body.

Their research only confirms what a recent study by the Karolinska Institute in Stockholm had said: environment, not genes cause cancer. The study, which analysed the medical histories of 44,788 pairs of twins, found that environmental factors cause about twice as many cancers as hereditary factors. The study found that environmental factors were responsible for 58 per cent of prostate cancer cases and genes, only 42 per cent (see 'Dreams, genes and reality', Down To Earth , Vol 9, No 6; August 15).

Physicians have long known that some prostate cancer grows very slowly and does not invade surrounding tissue, while other prostate cancers spread quickly and can lead to death. They did not -- and still do not -- know why. This research may yield a clue. "When most people think of environmental agents, they do not understand how these agents can cause cancer," says Balla. "We are proposing that they also act on already established cancers."

To test their theory that environmental factors might play a role, Balla and Lindholm first had to find out what made aggressive prostate cancer cells different from dormant cells. During the 1950s, investigators at other research centres were able to grow prostate cancer cells in tissue cultures. The researchers at Medical College have isolated and identified ten genes that are turned on only in aggressive variants of those cells. Their findings about these aggressive-associated genes and their behaviour were presented at the American Association for Research meeting in Philadelphia, usa, on April 11, 1999.

The next step in their research is to find out if pollutants in the environment can turn non-aggressive prostate cancer cells into killer cells. They also want to find markers that indicate aggressive cancer behaviour, and identify the target molecules in cancer cells to aid in finding a cure. The researchers are subjecting non-aggressive cancer cells in the laboratory to environmental pollutants including certain insecticides, cadmium (a heavy metal present in batteries, cigarettes, contaminated water and food) and cigarette smoke tar.

"Now we are finding out if some of those ten genes are activated by these environmental pollutants in less aggressive cells also," says Balla. "We don't know yet what these pollutants would do in experimental animals or in men with prostate cancer; what happens in tissue cultures may not happen in patients, but this is a very good start."

The Medical College is one of the few research institutions in the world studying this problem. Since prostate cancer is the most common form of cancer among men and the second leading cause of cancer deaths in men in the us , their research could benefit many. Balla and Lindholm began their research with a seed grant from the Medical College Cancer Center. They are continuing with a half-million dollar grant from the Environmental Protection Agency ( epa ).