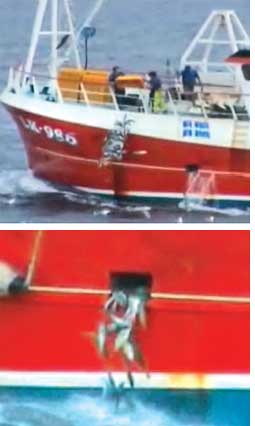 A British trawler has sparked an international row after being filmed with allegedly endangered fish caught in the Norwegian sector of the North Sea and then dumping the majority overboard in uk waters. Norwegian government coastguards filmed the crew of the Prolific, openly discarding more than 5,000 kg of cod and other dead white fish, or nearly 80 per cent of its catch. The incident took place on August 2 but the video only came to light ten days after the incident.

Norwegian minister for fisheries and coastal affairs Helga Pedersen said "Discarding fish not only means a massive waste of food and potential income, it also leads to unrecorded catches, resulting in a poorer scientific basis for our management decisions." uk fish experts said the practice of discarding fish was common but had rarely been so dramatically documented. eu quotas strictly limit the amount of fish that ships can bring back to port, but there is no restriction on the amount of fish they can catch. The current EU quota system for fish sets quotas at individual species level, which are then allocated and traded amongst individual fishermen. The solution, say environment groups, involves an overhaul of fisheries management, making discards illegal, and encouraging more sustainable fishing methods.