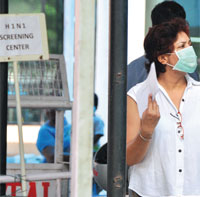 CHILDREN and adolescents injected with a swine flu vaccine could be at an increased risk of a sleeping disorder, warned a study.

Made by multinational pharma firm GlaxoSmithKline, Pandemrix vaccine was used in 47 countries, including India, during the swine flu outbreak in 2009-10.

Finland’s National Institute for Health and Welfare initiated the study after it received 57 notifications on the onset of narcolepsy following vaccination with Pandemrix; 54 were in the age group of four and 19. Narcolepsy is a rare disorder that causes people to suddenly fall asleep.

It set up a task force that collected data from across the country and found another 60 children and adolescents with the disorder. About 90 per cent of them had received Pandemrix vaccine. No such problem was observed in those above 19 years of age. Pandemrix vaccination increased the risk of the disorder nine times in the age group of 4-19 years, the task force said in its interim report to the government.

The disorder was possibly caused by the joint effect of the vaccine along with other unknown environmental factors, it added.

Iceland reported similar cases in January. Studies are now under way in Europe to know the distribution of the vaccine and its risk factors.