Bad state of toilets for women 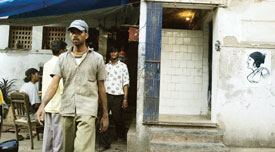 'A film about toilets' is all I knew when I reached Kala Ghoda, where Mumbai-based filmmaker and screenwriter Paromita Vohra's documentary film, Q2P, was being screened. Intriguing title for a film, I thought. In a packed hall, Vohra introduced the documentary in a sentence "This film is not just about toilets, but also about who will inhabit the city." The next 55 minutes were a journey, not just through public toilets but also through the morbid mindsets of our town planners.

The film began with shots of bulldozers, machines and rapid construction projects across Mumbai -- the "city of future", as Vohra calls it. We were then treated to shots of swanky centrally-air-conditioned glass buildings of the Bandra-Kurla Complex, 'the pride of Mumbai'.But no sooner had we slumped into our seats the film took an uncomfortable shift Vohra was taking her audience on a search for ladies' shauchalay (public toilet). Marching from one corner of Mumbai to another, she asked a simple, yet unsettling question, "Where is the ladies shauchalay?" There was none. Oh, all right a few 'designated' ladies' toilets, yes. But there were men inside some answering nature's call, a few bathing, others chewing tobacco. Some were even enjoying a cup of tea.

But why are there no toilets for women in a city with a huge number of working women? Vohra's interlocutors come up with gems. One says that since women sit and pee, they require more space, which is a luxury in Mumbai. Another, too embarrassed to talk about ladies' toilets, says women avoid public toilets because they have to sit and inhale foul smell. Men can stand and pee and so are away from the stench. These respondents were all, quite needless to say, men.
The film then takes a detour to Lutyens's Delhi, the 'drawing room' of the national capital served by the New Delhi Municipal Corporation (ndmc). A ndmc official showcases fancy toilets with automatic taps, hand driers and sweeping staff wearing uniforms. He claims that soon all lavatories in ndmc area will be "toilets that do not look like toilets".

But what of the Valmiki caste women who clean ndmc toilets? "I have to travel for over two hours to reach here, as we have been relocated to Delhi's outskirts. Toilets in ndmc area are good because it's a vip area. In other areas they are either non-existent or stink," one of them says.

Back in Mumbai, Vohra joins a large group of women on a "women's night out". These women and young girls, mostly from the upper class, make merry till the wee hours of the morning at the Gateway of India. But then they want to pee. The hunt for a public toilet is futile, so they relieve themselves in a dark corner. This reviewer can well empathise with their "control formula have minimal water and keep controlling your urge". On an outdoor assignment, I'd rather adhere to this "cowardly formula" than face the scary prospect of using public toilets.

But lets get back to Q2P. The most disquieting part of it, actually clogged drains in a municipal school's only toilet, dirty water flowing outside the lavatory, children standing at the toilet's broken door and peeing, girls in their menstrual cycle refusing to use toilets for there is never any water. A teacher in one of these schools sums up the state of affairs "Parents prefer sending their sons to paid public schools. Their daughters are, in contrast, packed off to these free municipal schools. Toilets never have any water and rarely there is a separate loo for girls. And as soon as the girls reach puberty, they refuse to use these toilets. Although money has been sanctioned for toilets under Sarv Shiksha Abhiyan, the funds have lapsed due to non-utilisation."

How can a Mumbai-centric film be complete without its slums those 'illegal' areas where more than 50 per cent of the city population lives. Toilets in these areas are an additional 'illegality. Some can manage to shell about Rs 20,000 to get an 'illegal' toilet constructed; the rest have to use filthy municipal public toilets -- without a light and with a queue that is at least 100-metres long during peak hours. Q2P is replete with stories of young women getting teased while walking to the nearest public toilet. Some are lucky to have grown-up brothers to protect them. The rest have to gather enough courage every time they have to stand in the Q2P.