The cultivation of the grass is now less cumbersome 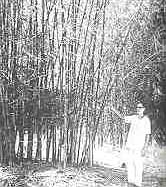 A giant fast growing grass, the bamboo is a highly versatile plant. From manufacturing paper and furniture to finding use in the construction industry, bamboo bears immense commercial importance. For centuries, the fine grained silica produced in the joints of bamboo has been used as a medicine in the Orient by the name of Tabasheer. Its ornamental use in landscaped gardens makes it all the more important.

The problem in propagating bamboo lies in the scarcity of seeds, which makes its cultivation a difficult proposition. Most bamboos flower and produce seeds only after 12 to 120 year's growth and that too just once in their lifetime. Against this background, a method developed by the Amravati forest division in Maharashtra, to allow easy and largescale multiplication of bamboo, is a definite breakthrough.

The technique was developed using the Dendrocalamus strictus variety of bamboo. Comprising four phases, the technique has been successfully applied. In the first phase, seedlings are raised during the monsoon. The second phase involves transplantation after a month. Following this is the first multiplication or planting out in March-April the next year. And finally, the second planting out in the subsequent monsoon. It is reported that using this technique, bamboo plantation can be multiplied 16 to 20 times within a year.

Huge stocks of seedlings can thus be produced using small quantities of seed. This technique has enormous potential which is evident from the number of clones of seedlings the method produces. It is found that about 2,62,144 clones are produced by a seedling by the beginning of the fifth monsoon. The proliferation is on a big scale, and that makes the technique useful.