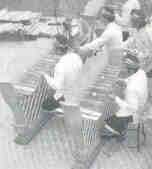 FOUR hundred enthusiasts from all over the world hailed bamboo as "regenerable steel and degradable plastic" at the recently concluded 4th International Bamboo Congress held from July 19-22, 1995, at Bali, Indonesia. The participants gathered at the Agung Rai Museum of Arts which housed the academic activities of the Congress.

The highlight of the Congress was the 5th International Bamboo Research Workshop, earlier ones being held in China (1985), India (1988), Japan (1990) and Thailand (1994). The Congress covered topics like environment and bamboo cultivation; role of bamboo in development; biodiversity, genetic resources and conservation of bamboo; bamboo harvesting; bamboo usage in the chemical industry and tissue culture of bamboo.

Of recent, the bamboo artisan's product range has been shrinking due to a boom in non-traditional material products. But bamboo may be combined with eco-friendly materials like leather and textile for manufacturing modern products. In India, bamboo now seems viable for structures big and small, permanent or temporary alike, in preference to energy consuming alternatives.

The Congress felt that to fully tap bamboo's potentials, support would be required from the area of science and technology, designing, afforestation and agro-forestry, production and marketing, training and education and as well as state policies.