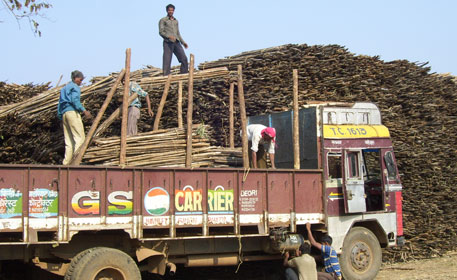 What is more important? A government legislation or a lease agreement between government and a private company? Well, for the Maharashtra government, it is the agreement that is inviolable if it predates a Central government legislation. At least that is what one can make out from a letter written by the Maharashtra chief minister in response to Union Minister for Rural Development Jairam Ramesh’s letter, directing that gram sabhas (village councils) be given bamboo harvesting rights under the Forest Rights Act (FRA) of 2006.

In the letter, Chief Minister Prithviraj Chavan has said that there could be “legal complications” in granting customary rights over bamboo to gram sabhas. This is because the “agreement with BILT (Ballarpur Industries Limited) predates FRA as it is in force since 1947 and was renewed in 2004-05.” The letter further suggests that community forest rights (CFR) over bamboo cannot be granted till the agreement is cancelled.

Ballarpur Industries is India's largest paper manufacturing company and has been harvesting bamboo from forests to which villages in Gadchiroli have been given community rights. The chief minister's letter is silent on whether government intends to cancel the agreement which is valid till 2013-14, or at least not renew it beyond that date.

To remove all legal complications, the letter further proposes to amend the defunct Maharashtra Transfer of Ownership of Minor Forest Produce in the Scheduled Areas and Maharashtra Minor Forest Produce (Regulation of Trade) (Amendment) Act that came into effect in 1997, by including bamboo, tendu and apta leaves, in the list of minor forest produce under the Act. This last proposed amendment, however, has been pending since October 2010.

Evading the matter of community forest rights issue, the letter proposes to give all minor forest produce rights to joint forest management committees (JFMCs).
Forest rights activist Mohan Hirabai Hiralal says the Maharashtra government stand is erroneous because FRA clearly states in Section 7 of Chapter III that land granted under forest rights will be deemed free of all encumbrances and procedural requirements.

Going by this criteria, Ballarpur Industries' lease already stands legally cancelled in CFR areas—both where rights have been granted and are yet to be granted. Also the legislation clearly states that its provisions remain valid notwithstanding any other law for the time being in force.

Regarding the proposal to transfer rights to JFMCs rather than gram sabhas, Hiralal says that JFM is applicable only in areas where CFR has not been granted, and government must respect the entity of the gram sabha as defined in FRA. He also demands  that the proposed amendments to the Maharashtra Minor Forest Produce Act and Section 28 of Indian Forest Act should be displayed on the forest department’s website and people’s consent should be taken before finalising the same.

Forest rights activist Madhu Sarin has said that the forest department’s clear intention is to retain its hegemony over forests through JFM committees and the Indian Forest Act by ignoring the community forest resource rights recognised under FRA.