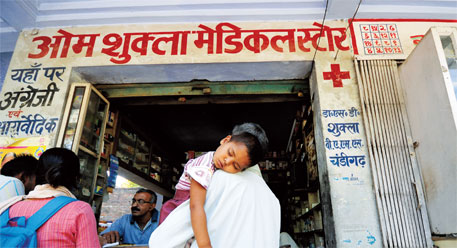 The Parliamentary Standing Committee on Commerce has advised the government to take all measures to stop any further takeover or acquisition of domestic pharmaceutical companies.
In its report tabled in the upper house of Parliament on Tuesday, the Committee “notes the danger arising out of Foreign Direct Investment (FDI) in brownfield pharma projects to the entire health of our country in terms of access and affordability of medicines, domination and elbowing out of our pharmaceutical industry comprising of predominantly small and medium pharma units, undue demand and pressure on TRIPS arrangements, etc.”

The Committee has gone to the extent of asking the government to impose a blanket ban on any FDI in brownfield pharma projects.

Brownfield investment refers to takeover of already established organization (as against greenfield investment which refers to businesses and projects that have to start from from scratch).
The committee argues that the pharmaceutical industry is not like any other industry/business. It is one sector of the economy which has to be dictated by public good rather than foreign investments, profit and revenue.

The Committee highlights in its findings that FDI in pharmaceuticals has been mainly brownfield investments. Over the past decade, one by one, key generic companies—Ranbaxy, Shanta Biotech and Nicolas Piramal—have been taken over by patent-holding multinational pharmaceutical companies. Without making any investments in R&D, production facilities or creating any long term jobs, the multinational companies have been systematically acquiring existing production and distribution facilities of Indian generic companies.

“It seems that the old hackneyed route for monopolists to buy out competition in order to prevent the emergence of low price market is in full play. The Committee is unhappy over these developments since the real danger of the 100 per cent FDI and the selling/takeover of Indian companies is the decimation of competition as well as capabilities,” the report states.
The matter was taken up for discussion by the Parliamentary committee in 2012, and the report was tabled in Rajya Sabha on Tuesday.
It is believed that health ministry and Department of Indian Policy and Promotion (DIPP) have also opposed foreign investment in brown-field pharma sector. On Monday, Finance Minister P Chidambaram said the government will soon finalise foreign investment policy on brown-field pharmaceutical projects.