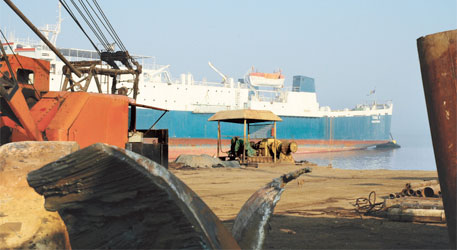 THE Supreme Court has directed the Centre to ban the import of hazardous waste. While hearing a 17-year-old case, the court also asked the government to amend the existing laws pertaining to toxic waste so that they comply with the Basel Convention, an international treaty that prohibits transboundary movement of toxic waste. India ratified the Convention in 1992.

The court gave the order on July 6 while disposing of a public interest petition filed by Delhi non-profit Research Foundation for Science, Technology and Natural Resource Policy against the Union of India in 1995. The petition had requested the court to ensure compliance of international and national laws and ban import of all types of hazardous waste. The court directed the Centre to bring the Hazardous Wastes (Management and Handling) Rules in line with the Convention and Articles 21 (right to life), 47 (public health) and 48A (environmental protection) of the Constitution. “The petition has not been treated as adversarial but as a litigation to protect the environment,” the court observed.

While many hail the order as a landmark judgement that will pave the way for safe disposal of toxic waste, others say much has been left undecided.

D Boralkar, member of the Supreme Court monitoring committee (SCMC) set up under the case, says there is nothing new in the order. “The court has only reasserted its earlier orders and disposed of the case,” he says.

Since 2003 the court has repeatedly ordered the Centre and state governments to comply with hazardous waste rules, issued directions to incinerate waste lying at ports and banned import of waste oil (see ‘Action unfolds’). Boralkar says the government has shown scant respect for the orders.

“Environment protection is not a day’s job. The Centre and states have not complied with the court directions, especially in areas including infrastructure capacity building and appointing adequate technical experts to check illegal import of hazardous wastes.”

Gopal Krishna of non-profit Toxics Watch Alliance, who is an applicant in the case, is pleased with the court’s order. “The order will result in revision of the amendments and subordinate legislation brought into force under the Environment Protection Act.”

He, however, says that four amendments made to the hazardous waste rules, including empowering the commerce ministry to issue licences to hazardous waste-generating companies and changing the definition of waste to material that can be reused and recycled, have diluted the provisions of the parent Act. As per estimates, 7.8 million tonnes of hazardous waste is generated annually in the country.

To treat this, the Central Pollution Control Board (CPCB) has set up only 14 treatment plants, most of which are not operational. “India does not have the capacity to deal with this amount of waste. And the amendments have only resulted in increasing hazardous waste in the country,” says Krishna.

Over the years, the court case encompassed a number of matters relating to hazardous waste. These include groundwater contamination in Gujarat’s Vapi Industrial area and Bhopal, and the ship-breaking industry, which accounts for most of the hazardous waste import.

At present, the court is hearing applications on the entry of Oriental Nicety, also known as Exxon Valdez. The American ship was denied entry into Gujarat’s Alang ship-breaking yard in May because it did not comply with the Basel Convention. The ship owner and the Gujarat maritime board have appealed to the court to allow the ship to enter India.

Advocate Sanjay Parikh, who represents the petitioner, says the court order does not address all of his clients’ concerns. “We are planning to seek clarification from the court,” he adds.

One of the pleas in the petition is on preparing a national inventory since there is no official data on the import and export of hazardous waste. The only available information is an internal letter of the Union Ministry of Environment and Forests. It mentions that between 2006 and 2009 import of hazardous waste increased by 48 per cent and of incinerated ash residue (highly toxic) by 130 per cent.

Dismissing concerns that the court order is incomplete, Boralkar says, “The judiciary has done its part. Now, it is for the executive to ensure that the order is duly implemented.” When contacted, CPCB sought time to respond.