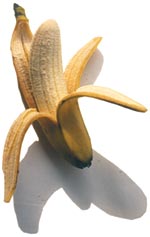 banana -- a staple food for hundreds of millions of people in the developing world -- is now threatened by fungal diseases. An article in the New Scientist magazine has warned about the risk of banana lovers finding shelves empty when they go to buy their weekly bunch.

The article focussed on the spread of a new form of panama disease throughout plantations of Cavendish, the most commercially popular variety. The disease is caused by Fusarium wilt fungus, which causes vascular wilt, and attacks the xylem vessels of a plant. The disease has spread to Australia, South Africa and parts of Asia. It is only a matter of time before it reaches the hub of commercial production: Latin America and the Caribbean.

Cavendish became the most popular commercial variety in the 1960s, before which Gros michel dominated the world markets. Gros michel fell prey to an earlier form of the panama disease. So fears are justified, says Emile Frison, who heads the France-based International Network for the Improvement of Banana and Plantain. Plantations of Cavendish are already endangered by another disease -- black sigatoka. Unlike black sigatoka (which attacks leaves), panama disease strikes the roots and cannot be controlled by fungicides. Together, the diseases may have an even more severe impact on other varieties of bananas. Cavendish just accounts for 13 per cent of the world production.

Apprehensions about the extinction of the fruit stem from the fact that banana has a tiny gene pool. In its wild form banana is almost inedible, for it is riddled with hard seeds. According to a theory, early hunters stumbled across rare mutant plants that produced seedless fruits. These were the forefathers of today's edible varieties.

Because of the genetic mutation, banana cells have three copies of each chromosome instead of two. This imbalance prevents its seeds and pollens from developing normally, resulting in sterile and seedless plants.

This also makes breeding of improved strains difficult. It has taken more than 80 years of comprehensive research to develop varieties like the Cavendish. Biotechnology can help improve the genetic pool of bananas within a short span of time. The modified genes would be safe for the environment: the fruit is sterile, and will not escape into the environment and contaminate other crops.