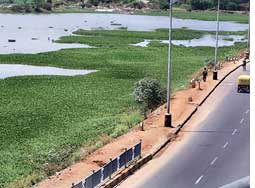 privatization of lakes in Bangalore is a sore point. Environment Support Group, an ngo in Bangalore, filed a petition regarding this in the Karnataka High Court in January this year.

"It's not just lakes but a question of handling public commons. Failure to manage the commons does not give the Lake Development Authority (lda) in Bangalore the right to trade it to corporates," said petitioner Leo Saldanha of the Environment Support Group. The government cites maintenance issues.

lda started leasing out lakes to hotels in 2004. Hotels are building floating restaurants and amusement parks for which they have an entry fee. In 2004, lda leased out the Nagwara Lake to Lumbini Gardens Pvt Ltd, where the company built hotels and an amusement park.

In 2006, Hebbal lake was leased out to the East India Hotels Ltd for about Rs 72 lakh. The company is planning a floating restaurant on the lake and has plans for amusement park, jogging track and water sport activities. In 2007, Agaram lake was leased out for 15 years to Biota Natural Systems.

The administration is to blame, says Saldanha. "The sewage system in the city isn't proper. The Bangalore Development Authority plans neighbourhoods without effluent treatment plants. There are no sewer lines either. Sewage ends up in the lakes. Bad planning is giving hotels an opportunity to take over the lakes," he says, adding that the administration should not just shift responsibility to private companies.

The lakes have been restored earlier. The Karnataka forest department, along with the Indo-Norwegian Environment programme, took up restoration work of the Hebbal lake in 2002. The petition stressed that the lakes that were once restored were being handed out to profit-making entities under the guise of rehabilitation, restoration and maintenance. It is also feared that the customary rights of fisherfolk in the lakes will be lost.

lda officials insist fishing rights won't be affected and say they don't have enough resources. "These lakes have been restored once but does it mean they will remain clean forever? Cleaning costs money. The government cannot go on spending on cleaning. There are 2,779 lakes in Bangalore and it is not possible to spend a lakh on every lake. There are employment issues as well. Just employing five people will cost more than a lakh. So we need to find people who can invest," says C S Vedant, ceo of lda.

Order: Preservation of lakes in the city of Bangalore

PIL: PIL on privatisation of lakes/tanks in Bangalore