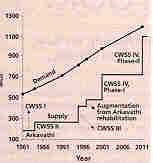 BANGALORE'S perrenial problem of water shortage is now in need of urgent alleviation measures. Two gauging stations on upstream Cauvery have recently 'judged an availability of 300 cusecs of water for the city under average rainfall conditions.

At an altitude of 840-940 m, Bangalore is located in the watershed area of two principal river basins - the Arkavathi and the Dakshin Pinakini. The Arkavathy's water is stored in the Hessarghatta and Thippegondanahalli (TG Halli) reservoirs.

Since the '70s onwards, as the storage capacity of these two reservoirs was insufficient for the city's burgeoning population, the Cauvery river was tapped for the first time. There were three stages of the project. Now the Cauvery IV stage has been envisaged. Today, Hessarghatta supplies just three mId and the TG Halli ekes out 40 m1d, supplying water to northwest Bangalore which does not have the Cauvery pipeline facility.

Bangalore's groundwater level is also depleting steadily. Out of 65 water-bodies in Bangalore, 50 have gried up within just nine years. The forest department is trying to revive the rest of the surviving waterbodies.

With the current 30 per cent water shortage, the situation is further jeopardised by massive urbanisation in the garden city. The city's comprehensive development plan of 1984, which projects a population of 70 lakh in AD2001, was amended in 1995, projecting the same population 10 years later - in AD 2011.

These findings carry even further weight when the implications of water supply, besides other civic amenities, are considered within the plan purview. In a bid to control Bangalore's growth, the concerned authorities have decided to 'decentralise' the industrial townships- of Whitefield, the electronic city at Agrahara, the Hinduja Park and the airport township at Devanahalli - all of which fall under the jurisdiction of the Bangalore Metropolitan Regional Development Authority.

But the water supplied to these ,towns' is entirely from the Cauvery iv stage. There being simply no other source of water available for either love or money, Bangalore stands to face grave shortages by the turn of the century.