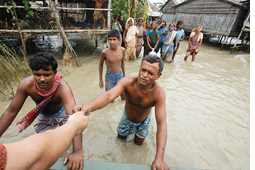 Two waves of big floods have devastated Bangladesh, killing over a thousand people and seriously affecting agriculture, rural industries and infrastructure. Although Bangladesh is spread across the flood plains of the Brahmaputra, the Meghna and the Ganga, floods in succession are unusual, say experts.

In the first wave in early August, the monsoon-swollen Brahmaputra and the Meghna inundated nearly two-thirds of the country, affected 11 million people and damaged one million houses and crops worth us $300 million on more than 600,000 hectares (ha). When the flood water receded, farmers began transplanting aman paddy seedlings, a late-monsoon variety grown in the flooded region, again. But soon the second wave of floods in early September brought their work to naught and the two rivers inundated 800,000 ha. The deadline for planting aman paddy, September 15, is over. Now farmers can grow only vegetables and rabi crops such as pulses and onion.For planting the next paddy crop they will have to wait till the next season in December January, says an official of the Department of Agriculture Extension, which carries out extension services at grassroots level.
The floods were caused by a heavy downpour in the Himalayan foothills and in the upper catchment areas of the Brahmaputra, Ganga and Meghna basins lying in India. The rainwater from these three basins drains into the sea through Bangladesh, which comprises only 7.5 per cent of the total area covered by the three rivers, says Samarendra Karmakar, director, Bangladesh Meteorological Department (bmd). In fact, the amount of rainfall Bangladesh received in August and September when the floods peaked was 26 per cent less than normal, Karmakar points out, while the downpour was 20 per cent higher than normal in June and 30 per cent higher in July. The average rainfall during the four southwest monsoon months, however, would be 10-12 per cent more than the 30-year average. But the bmd director says this is "normal".

Karmakar attributes the heavy downpour in the upper catchment areas of the Brahmaputra and Ganga basins to the southwest monsoon axis remaining stationary and attracting rain-causing clouds for a major part of the season that lasted through September.

Big floods in Bangladesh follow a 10-year cycle. They occur when the peak flows of the three river systems coincide in deviation of their normal peak flows that come separately. Although the floods this year were not as extensive as those in 1988 and 1998, two waves of big floods in succession are unusual, says Saiful Hossain, director, Flood Forecasting and Warning Centre (ffwc). There was another deviation from the normal pattern. The first wave of floods peaked on August 2, a month ahead of such deluges, according to Hossain. Luckily, the Ganga remained below danger levels.
Over the years, the country has developed disaster-management capabilities, but not perfected them. Hossain says ffwc can make 'deterministic' flood forecasts for 72 hours and give an outlook for five days. But with 92.5 per cent of the basins outside the country, coping with floods is impossible, say experts. The problem cannot be tackled unless upper riparian countries cooperate, adds Emaduddin Ahmed, director, Surface Water Modelling Centre, an independent trust established by the Ministry of Water Resources.

The exchange of data and information on water flow from upstream neighbours, particularly India, remains inadequate. Civil society groups in India also complain that the country's Central Water Commission keeps the water-discharge data in the Ganga, Brahmaputra and Meghna basins a secret (See 'Unprepared', Down To Earth, September 15, 2007).Officially, the data on the Ganga flow is available from the Farakka point, which allows flood forecast in Bangladesh six hours in advance. For the Brahmaputra the data is available from the Dhubri point, which allows forecast 48 hours in advance.

Hossain says the 72-hour forecast his centre makes, specifying the time, duration and extent of flooding, is supported by data on the Internet and is not officially shared with Bangladesh, which is a sad comment on regional cooperation.