Even as annual monsoon floods devastate Bangladesh, a plan formulated by the World Bank to prevent flooding is bogged down in controversy 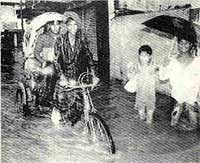 THE MONSOONS in Bangladesh have once again triggered floods, displacing 1.5 million people. The worst affected are Sylhet and Chittagong, where road and rail links with the rest of the country were snapped.

Bangladesh, located in the delta regions of two major rivers, the Ganga and the Brahmaputra, receives vast amounts of water and silt during the monsoons. The devastating floods of 1987-88 left one-third of the country inundated.

The World Bank has formulated a high-tech Flood Action Plan (FAP) for Bangladesh, involving the construction of dykes to prevent flooding of the Brahmaputra, Ganga and Meghna rivers. The FAP, however, has been frozen following strong criticism from an international coalition led by the Brussels-based International Flood Action Campaign Committee.

The coalition contends that the World Bank has not conducted adequate environmental impact studies and the flood control measures proposed in the FAP could cause greater floods by congesting natural drainage paths and gushing waters downstream of the protected areas, endangering thousands of people. Such criticism about the FAP has resulted in reduced financial support for this project.