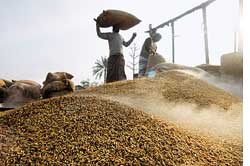 Farmers in Bangladesh, an agriculture-driven economy, are in for an era of dependency on hybrid seeds. Following a large-scale destruction of the country's paddy crops in the previous season, the government has decided to promote hybrid rice in a big way. Farmers growing hybrid varieties cannot use inbred seeds from their crop for the next season, unlike traditional rice varieties. Since hybrid seeds are bred in laboratories, it leaves them no option but to rely on private companies.

This boro season (December to May) a massive 1.25 million hectares (ha) is dedicated to hybrid rice; in the last season 0.4 million ha was under hybrid rice cultivation. Proponents of hybrid varieties say farmers need less of hybrid seed to cover a field, and the yield is 20 per cent higher than that of a traditional high yielding variety.

Agriculture experts, however, point out that hybrid varieties destroy plant diversity. Their management is so sophisticated that if mishandled it could lead to a total crop failure. "Most of our farmers are not properly trained to grow hybrids. It is a matter of great concern when we don't yet know how stable it is for our weather," says Z Karim, former secretary and agriculture expert. Last year, farmers complained that the problem of sterility in paddy was particularly severe in hybrids and production was less. The government did not conduct any study on the reason of sterility.

Besides, hybrid seeds are much costlier than local high yielding varieties. Only four-five companies import hybrid seeds, says an official of the Department of Agriculture Extension (dae), requesting anonymity. "So the government is actually promoting a handful of companies," he adds.

In some areas, micro-credit organizations provide hybrid seeds as part of their credit schemes, forcing farmers to take the seeds even if they do not want to grow them. "The lenders provide seeds as micro-credit instead of money but do not offer any training. When farmers fail to grow crops, they have to absorb the losses," says Farida Akhter, a plant diversity conservation activist.

Farmers say hybrid seeds cost them four times the traditional varieties. A kilogramme of imported hybrid seed costs around 200 taka (Rs 117), whereas an equal amount of traditional high yielding seed costs 50 taka (Rs 29). According to the agriculture ministry, 12,148 tonnes of hybrid seeds were used this year, up from 5,200 tonnes last year. Of this 10,348 tonnes were imported and only 1,800 tonnes produced locally.

The use of seeds from farmers' own crop is declining. Last year, the share of farmers' seeds in total rice cultivation was 28 per cent, down from 62 per cent in 2004-05. This year, the demand for seeds was 98,500 tonnes. The government provided 58,145 tonnes, while the private sector supplied 22,450 tonnes.

The government says the country is facing acute shortage of foodgrains and hybrids are the only way to improve yield. Last year, floods and cyclone Sidr destroyed a large portion of crops, especially paddy, leading to an additional shortage of 1.5 million tonnes of rice. "Our land is not increasing but every year the number of hungry people is growing. So if we want to face the reality we do not have any option but to go for hybrid seeds," says Shahidul Islam, director, field survey wing, dae.

But the high yield of hybrid varieties is still a claim, argues Akhter, adding that the government should not grow hybrids on such a scale without verifying the claim. And it is not as if only hybrids can give better yield. The Greater Barisal region, where the government is promoting hybrid rice in the current season, had a huge grain surplus with local high yielding varieties in 2001. Bhola, Barguna, Barisal, Patuakhali and Pirojpur districts had a surplus of 0.55 million tonnes of rice that year, says Sukanta Sen, executive director of the ngo, Bangladesh Resource Centre for Indigenous Knowledge.

"So we can actually grow enough rice for ourselves with our own varieties," he adds, citing dae data. Besides, he points out, hybrid rice will need more diesel for irrigation, more pesticides and fertilizer. This means more business. This also means more damage to the environment, and more dependency on markets.