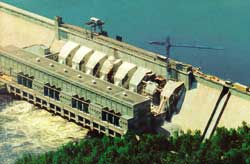 the European Investment Bank (eib) and the European Bank for Reconstruction and Development (ebrd), announced on October 6, 2005, that they would take into account the international standard for dam-building set by the World Commission on Dams (wcd).

The eib told International Rivers Network (irn), a us -based ngo, it will "align to...the wcd criteria and guidelines" for large hydro projects from which it will source carbon credits. But only a verbal commitment has been made. These statements do not indicate mandatory policies and they are also not reflected in the environmental policies of the institutions.

irn has, however, lauded the decision. "We welcome the decision of the two biggest public banks in Europe to join the growing number of institutions worldwide that take seriously the wcd recommendations," says Ann Kathrin Schneider, Policy Analyst, irn. The World Bank (wb) has, till now, refused to show any commitment to confirm to wcd guidelines "It is disgraceful that the wb seems determined to flaunt a European law. The wb has to wake up to the fact that applying the standards of the wcd is steadily becoming the norm," Schneider added.

eib and ebrd's decision is significant as both are planning to increase their roles as brokers of carbon credits under the Kyoto Protocol's Clean Development Mechanism (cdm). They are establishing an ebrd-eib multilateral carbon credit fund and a wb-eib carbon fund for Europe to buy cdm credits. which would be used to help European countries meet their emission reduction targets under the Kyoto Protocol.

The eu "Linking Directive" regulates the admission of cdm credits into eu's emission trading scheme (eu-ets). It states that carbon credits from large hydropower projects can only enter the eu-ets if they "respect" the recommendations of the wcd. However, again there is no binding commitment to strictly follow all the wcd guidelines.