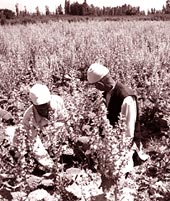 in the face of overexploitation of rare medicinal plants, the Jammu and Kashmir government has imposed a ban on collecting minor forest produce from demarcated forestlands. It has prohibited people from collecting medicinal plants. But it is encouraging people to grow these plants on private lands and nurseries and has decided to provide them technical guidance for this.

"The reason for the ban was that most of the plants were overexploited, with the result that some of the species had become rare and some were bracketed as endangered," says P Patanaik, the state's chief conservator of forest. The fast disappearing plant species include Podophyllum hexandrum, used to produce cancer drugs, Colchium luteum, and other plants used for making arthritis and epilepsy drugs. The illicit trade of these plants had attained dangerous proportions. Smugglers were taking advantage of the turbulence in the state and the slack monitoring mechanism. They hired people of the nomadic tribes living at high altitudes to collect the plants. "The nomads do it as a part-time activity to earn some money. It is not their livelihood," explains Vinod Ranjan, director of the state forest research institute. Still, to dissuade them from the illegal trade, the government has promised them full assistance if they wish to cultivate these medicinal plants on private land. It would employ those who don't have land but can identify the plants in its nurseries, Patanaik says. One such nursery has been established at Kangan.

Environmentalists, who have been demanding the ban, have welcomed the move. But Zulifikar Ahmad, honorary president of Al-Sarwat Students Coordination for Environmental Planning, a non-governmental organisation, cautions that the mere imposition of the ban won't work: "There needs to be a proper mechanism to check the activity of smugglers who are always on the prowl and connive with unscrupulous forest officials."

In another move, the state government has issued a new set of orders for timber import. "We encourage import of timber because it reduces the pressure on our forests. However, there is a notion that the imported timber is being sold in the name of Kashmiri timber. To check this, we have decided to regulate the activity. Traders will now have to name the species imported and the state or country from which it has come. This should also be corroborated by legal documents," says Patanaik. Timber needs to be imported in the state as there is a gap between its demand and supply. "There is a ban on felling trees in our jungles. The local timber is very costly. Ninety per cent of the timber used in construction is being imported from Australia and New Zealand. Still, the imported timber costs half as much," says Ghulam Qadir, president of Timber Merchants and Sawmill Association, Srinagar.