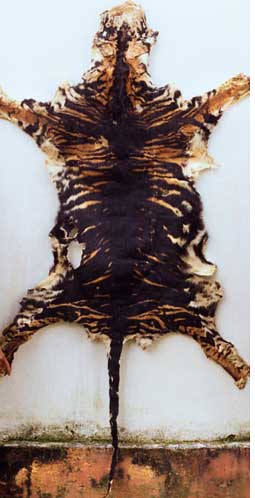 In the first week of July, a major player in wildlife trade was subjected to narco analysis and brain mapping at the Central Forensic Laboratory in Bangalore. Shabbir Hussain Qureshi was arrested in 2007 in Lucknow and was found to possess the skin and bones of wild animals. This is the second time such tests were conducted in India for cracking the wildlife smugglers' network. The first narco analysis was also done in Bangalore, on a wildlife trader from south India, Prabhakar Keshav, who had revealed Qureshi as one of his contacts. Keshav is also known to have links with those arrested in connection with the poaching of Asiatic lion in Gir.

The narco analysis on Keshav established the north-south links which belied prevailing intelligence.The south was not considered to have a poaching problem since it was not well known for its tigers nor was it easy to track tigers given the rugged terrain of wildlife reserves in the south compared to the plains of north India.

Information on wildlife trade in India has been restricted to the lower half of smugglers' hierarchy. Little is known about international buyers and big-time traders, though the Central Bureau of Investigation (cbi) inquiry into the Sariska debacle showed that organized syndicates were involved in wildlife trade.

Lack of information on the upper echelons of the illegal trade network is the main problem in controlling wildlife trade in the country (See Major traders). "Invariably we catch the small fish--the poachers and small-time traders--who are easily and rapidly replaced by others," says Ashok Kumar, vice-chairman, Wildlife Trust of India. Rarely does a big-time trader like Sansar Chand or Qureshi get caught. Even if a trader is caught, chances are he will not be convicted. If there is a focus on catching international buyers and on reducing demand by getting people to stop using animal parts, wildlife trade will reduce drastically.


Fighting wildlife trade involves various disciplines and departments the forest department, the police, customs officers, lawyers and taxonomists. Each of them works independently, not in tandem. The police and customs officials are not trained in wildlife law. And the result is that more than lack of evidence there are technical problems that let these criminals off the hook, says Kumar. Cases have been dismissed for a small slip-up on the part of the prosecution.

Sansar Chand and his associate went scot free when a case of smuggling narcotics was dismissed by the court because the chargesheet was filed a day late. In another case Tashi Tsering, wanted by the cbi for trade in 50 leopard and tiger skins, fled to Nepal. Since India does not have an operational extradition treaty with Nepal, he could not be brought back to India to stand trial. The volume of trade along the Indo-Nepal border is said to be high, so having an extradition treaty with Kathmandu makes sense.

Another hurdle is lack of readily available experts to identify the species being traded in. This is especially true of trade in plants and insects. Identifying tiger, leopard skins and ivory is relatively easy but when an unknown species is seized, it is sent to the Wild-life Institute of India in Dehradun. According to the Delhi regional office of the Wildlife Crime Control Bureau, the researchers are not able to identify the material immediately because they are busy with their research and teaching. This has led to a backlog of material waiting to be identified. The answer will be to set up expert groups across the country attached to the bureau.

The Wildlife Crime Control Bureau, created in June 2007 to coordinate efforts to crack down on wildlife trade, has police, forest and customs officials. The bureau's mandate is to collate and share intelligence on wildlife trade with states and concerned agencies at national and international levels. Its regional office in Delhi, however, says there is no centralized database of cases; the information lies with individual states.


Despite these disadvantages some cases have been rapidly dealt with and convictions obtained in the past few years (See box Convictions). "The conviction rate is slow in very old cases as wildlife crime was not taken seriously and evidence was not recorded properly due to lack of capacity," says M S Kachhawa, lawyer in Rajasthan who was involved in the black buck hunting case involving actor Salman Khan.

Kachhawa cites the example of Sansar Chand, one of the most wanted wildlife traders. He has been acquitted in many cases but the legal noose is now tightening. In April this year, a Delhi court discharged him in a 1992 case after the wildlife department failed to prove that Sansar Chand owned the house from which animal body parts were seized. On October 27, 1992, Sansar Chand was arrested by the department along with two others for possessing skins and other body parts of wild animals, including tigers and leopards. This was the third case in which Sansar Chand was discharged in the past two months.

Since Sansar Chand is a trader, in most cases he was not caught with animal parts but was arrested through testimony of others arrested. The problem is compounded because the evidence is not recorded properly.

The situation is different now. In a 2004 case of seizure of animal parts, the evidence against Sansar Chand is strong enough to convict him, says Kachhawa. A K Tripathi, an Allahabad-based wildlife lawyer attributes the changed scenario to the intervention of wildlife ngos through their lawyers.