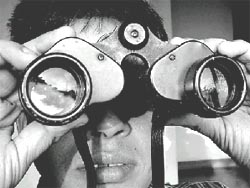 a clear glass pane usually reflects about eight per cent of the light that is incident on it. For someone using a pair of binoculars it means loss of precious light and therefore a duller magnification. For other applications, such as photovoltaic panels, television screens, one would like this reflection to be minimised. A team of scientists based in Switzerland have done just that. They have developed a new kind of cheap, antireflexive coating that could reduce glare and reflection from large areas of glass.

The film is a mixture of two kinds of liquid crystals. Molecules of one of the components are rod like in shape and can align themselves while they are in a liquid state. The other component has the property that on exposure to light it hardens and solidifies. The liquid component's molecules then get trapped as droplets in the solidified phase. These droplets can be removed and they leave behind small pits of the size of about 200 nanometer.

The researchers are able to shape the droplets formed by aligning the liquid crystals. For instance, they can generate a ridged surface with about 100-nanometer spacing between the ridges. When the ridges are comparable to the wavelength of light, the plastic sheet can be used as light diffusers. When such a plastic film is placed in front of a screen, it can make the image clearer or totally obscure the image, depending on the angle of viewing. Because the process of making the plastic film allows it to be spread on large and curved glass surfaces, the technique could be useful for making more efficient solar panels.