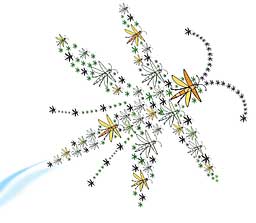 desert locusts are asocial by nature. They like to keep to themselves. But when food is in short supply they gang up to form swarms--billions of migratory locusts that move swiftly over great distances and reduce crops in their way into nubs in a few hours. The amount of food an adult locust consumes in a day is almost equal to its weight. Farmers across continents live in constant fear of harvests ruined by clouds of descending locusts.

In recent years major devastating swarms attacked farms in China, Africa and Australia. In November 2008, a swarm in Australia measured six kilometres. Swarming instinct in locusts is a riddle scientists have tried to solve for long. They propounded many theories. A recent one suggested locusts moved in swarms to avoid attacks from those behind them (see 'Back biting is locusts' natural behaviour,' Down To Earth, June 16-30, 2008). This did not explain what made them group together in the first place. Scientists from the UK and Australia led by zoologist Michael L Anstey of Oxford University have come up with an explanation after studying Schistocerca gregaria or the desert locust. Locusts belong to the grasshopper family and desert locusts are one of the 12 kinds that form swarms.

The scientists in their report in the January 30 edition of Science said locusts have their G-spot or gregarious spot on their hind legs. The locusts were grown in a laboratory. It was found that when locusts grew in number, the constant tickling on hind legs due to jostling increased the level of a neurotransmitter, serotonin, in the central nervous system and made them gregarious. The serotonin levels were monitored during solitary and gregarious stages. Results showed locusts tickled on their hind legs had three times more serotonin in their system than the calmer green locusts.

Jostling action by other locusts happens when population explodes and food becomes scarce. Two hours of jostling is enough to stress them. They then turn to one another and gather into a swarm. The metamorphosis is signalled by a change in the insect's colour from green to reddish yellow. "The gregarious phase is a strategy born of desperation and driven by hunger and swarming is a response to find new pastures," said Steve Rogers from Cambridge University. He said the switch to gregarious phase is easy to observe as the colour of the insect changes. The two kinds are so different in appearance and behaviour they were considered separate species till 1921.

To confirm the role of serotonin, researchers injected the locusts with chemicals that block the action of serotonin on its receptors. These locusts did not turn gregarious. The same result was achieved when chemicals that block the production of serotonin were used. A third experiment was used to conclusively prove the hypothesis. When the locusts were injected with serotonin, they turned gregarious. Scientists said the switch from solitary behaviour to gregarious behaviour is an example of phenotypic plasticity (ability to change appearance) and is important from the point of view of survival and evolution.

Serotonin is present in all organisms and has a role in modulating anger, aggression, mood, sleep, sexuality, body temperature and appetite. People use it as an anti-depressant. "Serotonin profoundly influences how we humans behave and interact, so to find that the same chemical in the brain is what causes a normally shy insect to gang up in huge groups is amazing," said Swidbert Ott of Cambridge University, a co-author of the article.

The discovery could be path breaking. "We hope this greater understanding of the mechanisms causing such a big change in behaviour will help to control this pest and more broadly help to understand the widespread changes in behavioural traits of animals," said Malcolm Burrows, also from Cambridge University and a co-author.

Desert locusts are one of the most dangerous insect pests affecting 20 per cent of the world's land surface. The Old Testament mentions locusts as one of the plagues brought on Egypt by God to persuade the pharaoh to release Moses and his fellow Israelites from slavery. Now that scientists know why and how locusts become a menace, the next effort could be to make chemical sprays that keep locusts tranquil and solitude loving.