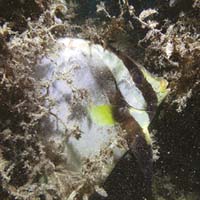 an endangered creature holds the key to arresting the decline of coral reefs. It is the batfish (Platax pinnatus). This timid fish has a surprising capacity of cleaning up dense weedy strands that smother inshore coral reefs and result in a macro-algal dominance over it.

This overgrowth of macro-algal weeds on coral reefs is difficult to reverse but not impossible. The overgrowth is referred to as a phase-shift. Batfish fits this bill.

At the same time it has thrown new challenges, as the fish may be one of the last intact herbivore populations capable of recovering coral reefs.

The findings came to notice during a recent study by scientists from arc Centre of Excellence for Coral Reef Studies, Australia. International researches have been associating the phase-shift of corals with habitat loss.Algae dominance is accentuated by overfishing of weed-eaters like parrotfish and surgeonfish--which normally keep the coral clean of weedy growth, it was believed.

But the study published online on December 19, 2006, in Current Biology notes otherwise.

The team conducted its research on a weed-infested patch of coral near Orpheus Island on Australia's Great Barrier Reef (gbr) to see whether local herbivorous fish could restore it to a normal state. The ensuing action was captured on underwater tv cameras. When the cage was removed from a particularly weedy patch, local herbivores pecked at it but made little impression on the dense growth of sargassum weed. Then these batfish showed up and got stuck into it. In five days they had halved the amount of weed. In eight weeks the coral reef was absolutely free from the weeds to grow unhindered.

According to the scientists, batfish represent a 'sleeping functional group', which means they are capable of performing a vital role in the life of the reef, but do so only under exceptional conditions. But the fish species is relatively rare on the gbr and currently have no specific legal protection. Besides, the reef has already lost the coastal mangroves, which prevent the weeds from overgrowth, and the dugongs, a major group of weed-mowers. The reef's other weed-mower, green turtles, are also seriously endangered. Scientists are now looking for other 'sleeping functional groups' like batfish to save coral reefs.