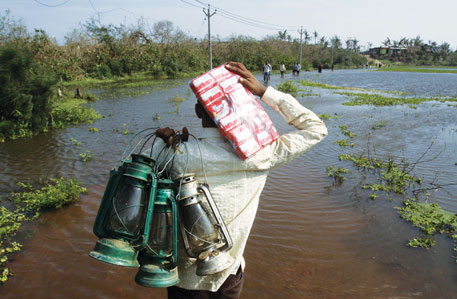 After facing the fury of Phailin a month ago, news of impending arrival of yet another cyclone has triggered panic among people in Odisha.

Though the Lehar cyclonic storm is expected to be less intense, neither the government nor the people of the state want to leave things to chance.

The cyclone is expected to make a landfall on Thursday around noon. The authorities have swung into action and have initiated necessary preparatory measures to counter the storm in 10 districts.

“The impact of Lehar would be less pronounced in Ganjam, Gajapati, Koraput, Malkangiri, Rayagada, Nabarangpur, Balangir, Sonepur, Puri and Khurda districts, but the state government has urged people to move to safer places,” says  P K Mohapatra, special relief commissioner in Bhubaneswar on Wednesday. The district authorities are also working with local panchayat heads and members to help people prepare for the cyclone, he adds. The government has identified these districts as the Lehar will hit the coast of Andhra Pradesh not far from Gopalpur in Odisha, where Phailin made its landfall last month. The state government has deployed Odisha Disaster Rapid Action Force teams in all the vulnerable areas.

Surya Narayan Patra, Odisha's minister of revenue and disaster management says Lehar will not have much impact on the state. However, the state government is ready for the flash floods induced by possible heavy rains in the southern districts because of cyclone Lehar, he adds.

The government has also issued a warning to people against visiting the seaside. People have been alerted about the cyclone through public announcement system. All the vulnerable pockets have been brought under safety cordon with multi-purpose cyclone shelter being readied to accommodate the people in the case of exigencies, says Patra.

The government has directed all the rice mill owners and warehouses to keep their rice bags in safer places. Marine fishers have been advised to return to shore immediately as the sea will be rough on Thursday. Thousands of marine fishers could be seen tying up their vessels at fishing harbors and jetties.

Villages that suffered the brunt of Phailin panicked on hearing about Lehar. In many areas, people could be seen queueing up at shops to buy essential commodities, mostly rice, flattened rice, dry food and kerosene.

The authorities have raised the cyclone signal level to four in Gopalpur and Paradip port.

Heavy rains or thunder shower is likely to occur at many places within 24 hours.