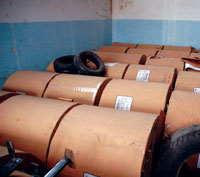 The Argentine government has won control of the country’s newsprint supplies after a vote in the Senate.

Legislation passed in the Argentine lower house in the third week of December, says the production, sale and distribution of newsprint brings the sole producer of newsprint, Papel Prensa, under government control. Media analysts believe it is a victory for Argentinian President Cristina Fernandez, who has long been at odds with one of the main media groups, Clarin.

Media analysts, however, believe the government will have a rough ride because the Clarin group is the largest shareholder of Papel Prensa, with a 49 per cent stake; another major media group La Nacion owns 22.5 per cent, while the state has 27.5 per cent. Government supporters say the new measures will mean newsprint is available to all newspaper publishers at a fair price.

But Clarin and La Nacion hold the move is an underhand attempt to expropriate private property.