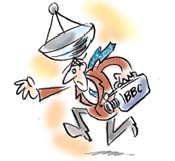 The bbc has scrapped plans for Planet Relief, a tv special on climate change. The decision came after the corporation's executives said it was not the bbc's job to lead opinion on climate change. Environmentalists slammed the decision. "The only reason why this became an issue is that there is a small but vociferous group of climate 'sceptics' lobbying against taking action, so bbc is behaving like a coward and refusing to take a more consistent stance," said activist and writer Mark Lynas.

Planet Relief was tentatively scheduled for broadcast in January 2008. It was seen as a climate change counterpart to programmes such as Live8, which sought to raise awareness of global poverty. But senior news editors expressed misgivings that it was too "campaigning" in nature.