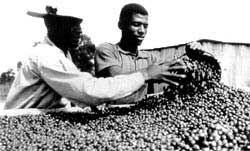 WHILE Coffee addicts might be able to brush off the ill-effects of caffeine on health for lack of clear evidence, they will find it harder to digest the fact that growing consumption of coffee is causing serious damage to the environment. Escalating demand for coffee might be directly responsible for global environmental problems such as the depletion of migratory songbirds, whose numbers have dropped by nearly half in recent years, says Jeffrey Parrish, a fellow with the American Association for the Advancement of Science.

Farmers in South America are giving up the old method of growing beans in the shade of tropical rainforests. Instead, they are clearing the forests for growing beans in the sunlight for higher yield. This, Parrish noted, entails increased use of chemical fertilisers and pesticides and also contributes to the loss of species and biodiversity, besides global warming. Coffee ranks at the top along with oil, tobacco and cotton as the most traded items in the international market. The US consumes a third of the world's coffee, said Parrish. He urged consumers to buy organic coffee, which is grown according to traditional methods.