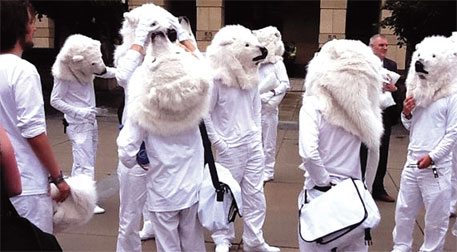 A Greenpeace protester who stormed the offices of an energy firm dressed as a polar bear has been cleared of disrupting the peace. Edinburgh’s Sheriff Court cleared Natasha Smith after Sheriff Roderick MacLeod ruled prosecutors had not proved she acted illegally. Smith was in a group of more than 50 activists who raided Cairn Energy’s offices in July. They objected to Cairn’s plan to drill for oil off the coast of Greenland. Smith was charged with placing Cairn Energy staff in a state of fear.

The court heard from a police officer who said protesters sang Bear Necessities from family musical The Jungle Book. “I’m not prepared to hold that people who have entered a building dressed in unusual costumes constitutes threatening behaviour,” MacLeod said.