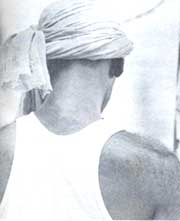 Myths can sometimes be closer to reality the one would suspect. For instance, in Europeao folklore one finds mention of creatures called werewolves, who are described as peopoo who can change into wolves, with hair as over the body and face. However, there rs a human disorder called the congenital generalised hypertrichosis that produces a similar state. Now, scientists in America have traced the reason behind this rare hereditary condition that results in a furry appearance since birth to the presence of a mutant gene. Scientists believe that the hairy condition in humans might be an example of an atavistic mutation - the reemergence of an evolutionarily ancient trait that is normally kept supressed. The disorder reminds one of the original mammals covered from head to toe with a protective fur coat, and which condition was lost for some reason by the modern man.

In hypertrichosis, the only parts of the patient that remain free of hair are the palms of the hand and the soles of the feet. In humans with hypertrichosis, even the cheeks, neck and eyes, which lack fur in apes like chimpanzees and gorillas, are not spared. This suggests that the gene recalls something earlier than the emergence of hominoid apes abotit 25 million years ago.

Remarks Brian K Hall, a development biologist at Dalhousie University in Halifax, Nova Scotia, "Atavistic mutations tell us that a lot of information is kept around for a very long time. Just because an animal isn't using a gene anymore doesn't mean the information just disappears." But Jose M Cantu, head of genetics at the Mexican Institute for Social Security in Guadalajara warns that the atavistic mutation is only a theory for speculation.

The precise gene resulting in generalised hypertrichosis is not known yet, but is located somewhere on the bottom half of the X-chromosome. Researchers found this location by studying the genetic material of members of a large Mexican family who may be the only human representatives of this particular mutation.

Being an X-linked trait, the gene finds its fullest expression in males. Females with the condition inherit only one copy of the mutant X-chromosome, with the normal copy of the other X-chromosome offering partial protection against the disorder.