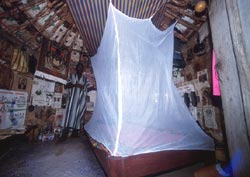 tanzania has become the first African country to start producing a new type of long-lasting bednet that could help significantly reduce deaths from malaria. The bednet is made from specially designed polyester that incorporates insecticide into the material's molecular structure. Unlike a conventional bednet, which needs to be sprayed with insecticide every year to remain effective, the new bednet can fend off mosquitoes for more than four years without being re-treated. "If we can get these kinds of nets into the homes of the people who need them the most, then we can take a huge stride toward containing a disease that kills 3,000 children every day," says Carol Bellamy, executive director of the United Nations Children's Fund (unicef).

An Arusha-based manufacturer, a-z Textile Mills, has started producing the bednets, with financial support from an international public-private partnership which includes unicef, the World Health Organization (who) and private companies. The nets (designed in Japan) were previously manufactured only in East Asia. According to officials of the who, producing the nets in Africa will increase their availability and also strengthen the development of the continent's industry. Bellamy asserts that more needs to be done to allow the poor to benefit from the new technology. "Reducing taxes and tariffs on material needed to produce the netting will help. If possible, the cost of the new nets should also be subsidised," she opines.