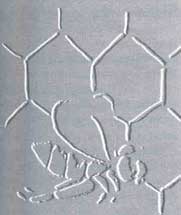 A NEW discovery has challenged the age- old belief that flowers came before bees. While the earliest angiosperms, or flowering plants, came into existence about 120 million years ago, the oldest known fossil of a bee is a specimen nearly 80 million years old, found trapped in amber from what is now the city of New Jersey in the us. But a recent discovery suggests that bees may have been around as long as 220 million years ago.

Stephen T Hasiotis, a palaeobiologist at the us Geological Survey in Denver says that the evidence to support this idea comes from the fossilised logs of the Petrified Forest in Arizona, USA, which stood as tall trees before they were turned into stone about 220 million years ago. These fossils bear the tell-tale marks of insect nests and also chambers resembling the nests of modern bees. But Charles D Michener, an entomologist at Kansas University in Lawrence says that although the fossil nests looked like the nests of modern bees, more research is needed to confirm the finding. Argues Michener, "It is always possible that some insect no longer extant made bcc-like nests back then. The best evidence, of course, would be to find some fossil bees associated with the nests."

The new finding has put palaeobiologists in a dilemma as to what the bees were doing before the appearance of flowering plants. They say that either angiosperms also appeared much earlier than believed, or the bees then fed on cone-bearing and woody plants such as conifers. The latter case is believed to be more likely of the 2. But choosing this alternative raises serious doubts about the theory that angiosperms and social insects like bees evolved together.

Contends Hasiotis, "This new evidence suggests that insects like bees and wasps may have facilitated the evolution and diversification of angiosperms."