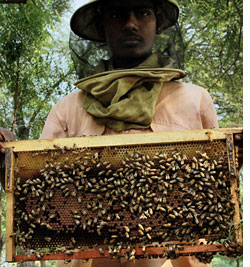 scientists at Montana University, usa, have developed an alarm system to monitor the bee buzz to track airborne toxins and contaminants.

Bees make sounds at different frequencies depending on the environment, says Jerry Bromenshenk, the lead researcher. For example, a parasite-infested beehive produces a sound akin to a roar, and a hive without a queen bee produces a different sound.

But how does one interpret the different sounds? The alarm system, which was granted a patent in September 2007, involves a contraption with a small microphone inside the hive to pick up different sounds. The sounds are transmitted to an amplifier with another device which filters, summarizes and analyses the acoustic data.

Pre-recorded acoustical fingerprints of bee sounds are matched with the sound produced by a particular hive and a match is derived to indicate the contaminant in the air.

Bees form ideal candidates for studying airborne chemicals because they cover wide distances. Unlike chemical traps or absorbants--currently used to detect airborne compounds--bees can cover a distance of around a 5-km radius.

They also have a highly developed sense of smell, almost 40 times more acute than that of human beings. "Thirty seconds is what bees need to detect a chemical. They can also recognize different chemicals and respond accordingly," says Bromenshenk.

Renee M Borges, associated professor at the Centre for Ecological Studies, Bangalore, agrees. "The method the scientists suggest appears reasonable provided they have all the right controls, so that they can actually attribute change in acoustic properties to the individual pesticide or family of pesticides with different physiological effects," she says.