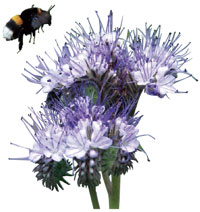 COMMONLY used pesticides like neonicotinoid even in low doses can spell doom for bumblebees and honeybees. The pesticides interfere with their homing abilities, making them lose their way.

In recent years, bee populations have been dropping rapidly. Scientists feared pesticides could be behind this but it was not clear how. Bees are important pollinators of flowering plants, including fruits and vegetables.

In two studies published in Science on March 29, British and French researchers analysed bees and neonicotinoid insecticides. The insecticides introduced in the 1990s are common. Recently activists in the USÃ”Ã‡Ãªfiled a petition with more than a million signatures asking the government to ban pesticides called neonicotinoids, saying they harm bees.

In one of the two studies, a team from University of Stirling in Scotland exposed developing colonies of bumblebees to low levels of a neonicotinoid called imidacloprid. They found in comparison to bees not exposed to the insecticide (control colonies), the treated colonies gained less weight, suggesting less food was coming in. The treated colonies were on an average eight to 12 per cent smaller than the controls. They also produced about 85 per cent fewer queens—a finding that is key because queens produce the next generation of bees.

In the second study researchers from French National Institute for Agricultural Research (INRA) tagged honeybees with radio-frequency identification microchips at their back to track their movement and gave them a low dose of neonicotinoid pesticide thiamethoxam. They found the pesticide interfered with the bees’ homing systems and they could not find their way home. The bees were about two to three times more likely to die while away from their nests, the team says. The pesticide manufacturers are only required to ensure that doses do not kill bees, but consequences of doses that may cause behavioral difficulties are ignored, the researchers note in the paper.