Beggars on a beach of gold 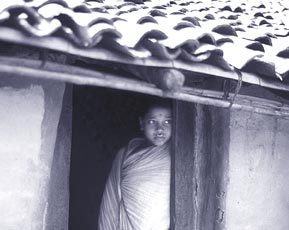 Tourist brochures love using the time-worn expression that India is a land of paradoxes. But this is no publicity clich. India faces a paradox -- people die of starvation while warehouses are overflowing with food. Award-winning director Sagari Chhabra's Hunger in the Time of Plenty is an attempt at deciphering this apparent contradiction.

The film opens with still shots of starving people. The images then dissolve into that of a dark room -- a warehouse full of grains. An interplay of contrasting visuals, the film is a half-hour dossier of India's biggest challenge -- local food security.

The 30-minute documentary was shot in areas of Rajasthan and Orissa that were reeling under severe drought. Everywhere, there are people narrating the absence of local food security. The film tracks how local ecological devastation has caused poverty in villages and how myopic government policies facilitate the process. A first hand narration reveals how the food for work programme in villages has failed, pushing millions into a hunger trap. Through stark visuals and narration, the film shows how people fight to be included in the "below poverty line" category to qualify for a little food.

With a loss of livelihood, the best option for villagers is to migrate for survival. From Rajasthan and Orissa, the camera now focuses on Delhi, where these same people are working hard on the streets, simply to survive.

The screening was followed by a debate with a panel comprising former secretary of the Planning Commission N C Saxena, right to food activist and noted economist Jean Drze and director, Action Aid, India, Harsh Mandar.