Behavioural changes is the way to curb AIDS

Doctors and social workers advocate awareness as the best way to prevent AIDS, a disease that has no vaccine or cure, from spreading. 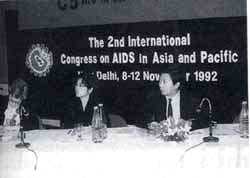 SCIENCE may have conquered smallpox, but as far as AIDS is concerned, education may be a better weapon. According to WHO estimates, there are 10 million people infected with the AIDS-causing human immunodeficiency virus (HIV) worldwide. Two-thirds of the infected persons live in developing countries, of which three million are women and one million children.

For India, the news is bad. While the epidemic curve appears to be plateauing in the USA and Europe, it continues to rise in Africa and Asia. The majority of HIV-infected people in Asia and the Pacific is in India and Thailand. India has 237 AIDS victims and 10,000 people who have tested HIV-positive, but more than one million people are believed to have been infected by the AIDS virus. In Thailand, more than 400 AIDS cases have been reported and between 200,000 and 400,000 people are thought to be HIV-infected.

But the numbers involved in this incurable disease don't convey the range of stigmas and myths associated with AIDS. "One or one million - what does it matter? Until you know of someone with HIV or AIDS, or are infected yourself, statistics don't mean a thing," lamented a HIV-positive social worker from Australia at the 2nd International Congress on AIDS in Asia and the Pacific, held in New Delhi in November.

The only effective way of checking HIV infection is through change of attitudes and behaviour, said the participants at the congress. "The greatest challenge is knowing and accepting that one cannot 'catch' AIDS like cholera or even the common cold and one cannot control it through coercion," said WHO director for the global programme on AIDS M H Merson.

"Routine testing cannot control AIDS and actually hampers prevention programmes because people go underground. Above all, attempts to screen for HIV are dangerous because they convey the illusion that the authorities have got the problem firmly in hand," said Merson.

Many community workers and activists feel there is a preoccupation with testing and too much emphasis on HIV transmission among the high-risk groups. They feel the important message should be that everyone is susceptible to HIV infection and that people should avoid unsafe sex and be aware of how HIV spreads. Victims -- most of whom adults in the prime of their years -- should be given a supportive environment to live productively and with dignity.

"There is such preoccupation with testing. But what does one do if found to have the HIV virus?" asked an activist from Malaysia. "What does the poor woman who has to sell her body to support her family do when she finds she is infected with HIV?"

Dr Rob Moodie, a delegate from Australia, said the creation of a social and legal environment is important for behaviour change. "If an antagonistic environment exists -- such as carrying of condoms being evidence for conviction for prostitution...(or policies such as) the War on Drugs in the US that has inadvertently led to an increase in sharing of needles and syringes as users find it too dangerous to seek or carry clean needles and syringes -- then behaviour change will be difficult to bring about. Public policy must reflect not what society sees as ideals of sexual and drug-using behaviour but what the reality is."

Jon Ungpakorn from the AIDS Counselling Centres and Educational Support Service in Thailand said testing people for HIV without their knowledge is unacceptable as it will not lead to behaviour change, especially in a society that discriminates against them. He said only voluntary testing is acceptable, and there must be absolute confidentiality as well as pre- and post-test counselling and support services.

In India, about half the blood used in urban hospitals is obtained through commercial blood collection. Professional blood donors risk being infected with HIV through the use of unsterilised equipment in blood collection centres. A UNDP study in Ahmedabad, Gujarat, found 30 per cent of blood used in hospitals and clinics was collected from commercial blood donors and the state government estimates 28 per cent of this blood may be HIV-contaminated.

The International Society for Research on Civilisation Diseases and on Environment started an AIDS prevention unit to look into the safety in blood collection centres, rights of commercial blood donors, hazards of repeated blood giving and alternative income- generating opportunities. The unit found that once they begin donating blood, "commercial donors realise it is an easy way to earn a living and become addicted to this way of life. Some give blood as often as 10 times a month."

Positive legislation can go a long way in promoting a supportive climate for those living with AIDS. The Indian government, according to reports, is considering banning discrimination against HIV victims in offices and factories following cases of private companies sacking infected employees and conducting AIDS tests before employing them.