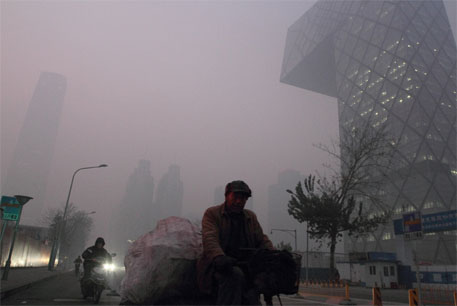 Bucking under public pressure, Beijing on Wednesday closed the first of its four large coal-fired power plants to cut pollution, according to media reports. There was growing public anger due to persistent smog in the city. The Chinese capital plans to replace the power plant with a gas-fired one and by bringing electricity from other provinces.

Beijing has a major air pollution problem that reached emergency proportions in winter 2012-2013, says Greenpeace. One of the key contributors to the problem is the very large amount of coal burning, and power generation is the region’s biggest coal-burning sector, it says.

After closing the 50-year-old Gaojing Thermal Power Plant, Beijing plans to close the remaining thermal power plants by 2016 and generate power wholly by clean energy. It is now drawing up plans to ease traffic. This may include a congestion charge.

Beijing’s average PM2.5 index of 91.6 micrograms per cubic meter in first half of 2014 represents an 11.2 percent year-on-year decrease.

The airborne particles smaller than 2.5 microns in diameter are blamed for the smog in Beijing. The figure is still far above the national standard of 35 micrograms per cubic meter, says a report by Beijing Municipal Environmental Protection Bureau.

In September 2013, a five-year plan was introduced in the city to slash coal consumption, promote clean energy use and reduce production capacities of heavy polluters.