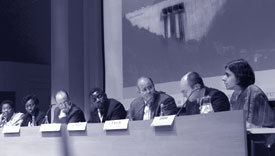 On August 22, 2005, a panel discussion on large-scale water infrastructure was organised by the Stockholm International Water Institute, Sweden as a part of the World Water Week. Moderated by Nik Gowing of the British Broadcasting Corporation (bbc), the debate often appeared akin to a fancy television talk show. Efforts of some panelists to put the debate in a larger context yielded little result.

Jamal Saghir, World Bank's energy and water director set the tone: "Our Country Assistance Strategy will now involve high-reward high-risk projects". A gratified Kenyan water resources minister, Martha Karua remarked: "This offers us an opportunity to work with the World Bank. And, the bank has put absolutely no pressure on us to build dams". She then added: "Egypt owes its economic growth to dams. South Africa, in comparison, lags behind due to a lack of facilities to store water, despite lots of rainfall".

The hosannas for the bank were soon cut short. "The debate is not whether to have dams or not to have them, nor is it about big or small dams," asserted Sunita Narain, director of the Centre for Science and Environment, New Delhi. "We must identify appropriate solutions and involve people in implementing them," she said. The debate turned to the high cost of big dams. Karua ascribed it to corruption in developing countries. Narain countered: "In India, dams have become unsustainable due to bad water pricing. So, calculate costs carefully and see if dams are viable in the long run." And what about social and environmental costs? Saghir had nothing to say except the trite one-liner: "All our projects are evaluated for environmental safety".

Gowing observed in his concluding remarks: "A debate on large hydro-infrastructure can really drive people with different views to their respective corners, like boxers in a ring." Well said. But the moderator could not pick the brains of panelists on alternatives to big dams and on issues of resettlement of those displaced by dams.