GM groundnut on the anvil 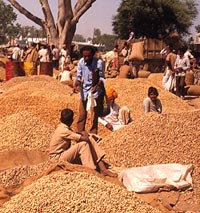 scientists from the Hyderabad-based International Crop Research Institute for the Semi-Arid Tropics (icrisat) are altering the genetic make-up of groundnut to produce varieties that can withstand viral and fungal attacks. One of the genetically modified (gm) varieties, which will effectively ward off the Indian peanut clump virus (ipcv), will be available for field trials by next year if the regulator for gm crops, the Genetic Engineering Approval Committee, gives its nod. The other gm variety, which will have substantially less of the cancer-causing aflatoxins normally present in peanuts, is in the early stages of research. Aflatoxins are produced by the fungus Aspergillus flavus that gets into the plant in early stages of germination.

The work of icrisat scientists is significant, as groundnut crop loss due to diseases including the ipcv and A flavus menace is a whopping us $2 billion in the semi-arid tropics alone. The diseases are mainly caused by abiotic stresses such as failure of rainfall.