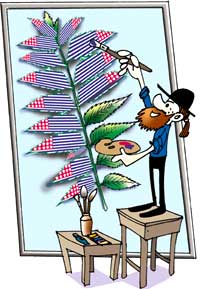 In the first fortnight of March, the Convention of Biological Diversity (cbd) shall be put to test. The eighth Conference of Parties (cop-8) will be held in Brazil from March 20-31 bringing together 188 countries, just a few months after the World Trade Organisation (wto) ministerial in Hong Kong. A part of cbd's agenda will have to be worked out under the shadow of what transpired at the wto, or actually, what did not.

cbd has always had a troubled relationship with the wto, because their characters are fundamentally different. Whereas wto is an international body governing trade, which sees issues such as environmental and other arguments against unrestricted trade as 'barriers', cbd takes on the onerous task of trying to build an international regime of sustainable and equitous use of biodiversity and its preservation. While many countries are signatories to both cbd and wto, developing countries -- especially ones with greater biodiversity to manage -- depend upon the former to protect their rights to earn benefits when other countries or users utilise their biodiversity to manufacture products. They look upon wto as a place where business interests become paramount, not environmental conservation or equity.

Disclosure of norms is a key difference between cbd and wto. Under cbd, a scheme to provide access to user groups and share benefits with those who have traditional knowledge of the use of biodiversity, demands that makers of products who use physical elements of nature disclose information on:

• Evidence of prior informed consent;

But the us, supported by several developed countries, has taken the stand in wto that there is no express obligation under cbd regarding disclosure requirements in patent laws. In making this argument, the us is quibbling. Not being an instrument to enforce intellectual property, cbd does not create patent disclosure requirements, but article 16.5 clearly obliges countries to cooperate to ensure that patents and other rights do not run counter to cbd's objectives. Bolivia, Brazil, Colombia, Cuba, India and Pakistan have formed a group that has taken a strong stand against the us submissions in wto. But the fact that the us is not a signatory to cbd though one of the most influential players in its negotiations, goes to show how heavily the odds are stacked against the South.
Now, at wto, developing countries have been able to make the ministerial declaration emanating from Hong Kong on December 18, 2005, a bit more weighted in their favour by including a clause in the statement that wto should 'intensify the negotiations' with cbd over patent issues enshrined in the Trade Related Intellectual Property Rights agreement, something that developed countries refused to let through in initial drafts. But, for all practical purposes, besides the inclusion of this text, there has been no real movement on environmental issues in the Hong Kong ministerial (see 'The illusory success of the WTO' Down To Earth, January, 15, 2006). This will haunt the agenda of cbd's cop-8 at Brazil .

In cbd's cop-8 agenda, access and benefit-sharing will be critical issues. To the exasperation of many biodiversity-rich countries, there has been very little progress in creating a regime for benefit-sharing and providing access after the basic principles were put in place. Before the Brazil meet, the fourth meeting of the ad hoc open-ended working group on access to genetic resources and benefit-sharing is to be held, beginning January 30,2006 at Spain. It shall try hard to break the deadlock. The parties shall meet there knowing full-well that in a similar cbd meet previously , all attempts by biodiversity-rich nations like Brazil and India to get cbd to push wto on environmental agenda were thwarted. While cbd may have been given the mandate in cop-7 to come up with a regime for access and benefit sharing before cop -8, but parties to the convention are aware that the roadblocks in wto will mean slow progress.

While case studies of partially successful benefit-sharing programmes in countries like Peru may be cited as a globally enforceable regime, it will still remains a far-fetched idea until developing countries are able to dramatically alter the agenda at wto.