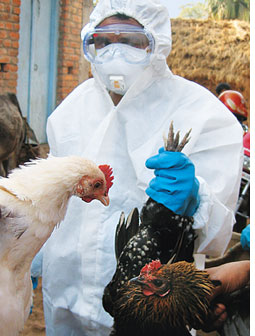 on january 15, the union government confirmed a bird flu outbreak in West Bengal. The worst India has ever seen, the outbreak caught the authorities unprepared. Lack of trained health personnel and equipment, inadequate dissemination of public information about the virus, and the resultant local resistance to poultry culling has shown up an administration incapable of dealing with the crisis. Chief Minister Buddhadeb Bhattacharjee has called the situation alarming.

The h5n1 virus, first detected in Birbhum district, has since spread to eight more districts--South Dinajpur, Murshidabad, Nadia, Burdwan, Bankura, Malda, Cooch Behar and Hooghly--killing thousands of chicken. Health officials fear the virus could be spreading further, with poultry deaths being reported from Howrah and Darjeeling. No human infections have been reported yet.

Culling operations are moving slowly. By January 21, about 240,000 birds were culled--far short of the 400,000-in-one-week target. "The disease is spreading rapidly," says Dilip Das, director of the animal resources development department. The state animal resources development minister, Anisur Rehman, said the number of culling teams would be raised to 400, from the 290-odd that have already fanned out in the affected districts. The culling target has now been raised to 2 million.

The union government is sending 150 veterinarians from other states. It has asked West Bengal to cull poultry even in areas where the virus is suspected. Central teams are monitoring neighbouring Bihar and Jharkhand to assess their preparedness and also taking preventive measures in Orissa, Assam, Meghalaya, Tripura and Mizoram. Officials say the virus could have come from Bangladesh which has been battling bird flu since February 2007.

The current outbreak is harder to isolate because it has hit home-bred country chicken rather than poultry farm chicken whose movements are restricted within the farm. The recent arrival of large flocks of migratory birds in Rampurhat, Birbhum, ground zero of the outbreak, and nearby Bolpur town and Parulia village, is posing another threat to containment. Rehman said it would be impossible to cull these birds. "We don't have the infrastructure. We will, however, test some of them for the virus." Avian experts from the Bombay Natural History Society are monitoring the migratory birds.

People in the affected villages have little information on the disease and how it spreads and many aren't ready to cull their chicken because poultry is an important source of income. The official delay in providing compensation for culled birds has led to confrontations. In Birbhum's Nalhati area, villagers attacked a culling team on January 19, injuring four officials. Several such teams are now refusing to work without adequate protection.

The organized poultry sector in the state has lost up to Rs 25 crore since the outbreak. In Malda, a poultry farm owner committed suicide on January 19, apparently depressed over the huge loss he faced. In many affected areas chicken and eggs are being smuggled out to neighbouring districts and states to minimize the loss. The fall in chicken prices has attracted more buyers, aggravating the danger of human infection.

Precautionary measures for humans have also been dismal. Few steps have been taken to set up containment zones or to check people's movement in affected areas. Local hospitals don't have isolation wards and the makeshift isolation wards have no specialized doctors or equipment. In Bolpur, the health department set up an isolation unit in an old house that used to be a police morgue. The unit was later shifted.

The state has set up three-member teams to conduct door-to-door health surveys, but the surveyors have little medical expertise other than checking temperatures and recording pulse rates. Almost all primary health centres are out of the preventative drug, Tamiflu, which is now being given out only to the animal research department staff and health surveyors. Villagers turning up with fever and cough are given regular antibiotics and fever pills. "We are doing what we can; Bengal has never seen bird flu before," says Sanchita Bakshi, state health services director.