Benzene in the air

Levels of carcinogenic pollutants are alarmingly high in Calcutta's air 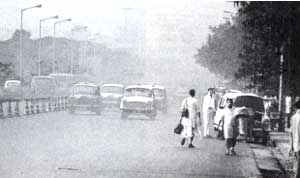 calcutta's air is highly polluted with polyaromatic hydrocarbons (pahs) such as benzene, toluene and xylene (btx), which are carcinogenic. Levels of these pollutants in the ambient air have been assessed for the first time in an urban environment in India. The study was conducted by a team headed by Dipankar Chakraborti, director, School of Environment Studies, Jadavpur University, Calcutta. The results are alarming as the levels of btx are one to two times higher than those in many other urban areas of the world. According to the World Health Organisation (who), these compounds should not be present in the air at all.

btx in the ambient air were monitored during winter from 1992 to 1994 in Calcutta city. Exhaust from different types of motor vehicles plying on the streets of Calcutta and smoke plumes from coal-based stoves were also sampled.

In the three years of the study, average concentrations of benzene, toluene and xylene were highest in 1993. They stood at 7,082 micrograms per cubic metre (mg/m 3 ), 319 mg/m 3 and 281 mg/m 3 respectively. The median concentration of benzene and toluene were lowest in 1994 at 491 mg/m 3 and 126 mg/m 3 , while for xylene it was lowest in 1992 at 45 mg/m 3 . btx levels were highest in the winter of 1993. The researchers have not explained why the levels were high during 1993. High levels of these pollutants have been explained on the basis of thermal inversion, whereby concentration of each pollutant would increase as the emissions are trapped in the air during winters.

The health effects of exposure to unsafe levels of pah s are quite serious. Benzene exposure affects the central nervous system and can affect the immune system. Chromosomal abnormalities of bone marrow cells and circulating lymphocytes have been observed in people exposed to benzene. Fatal anaemia has also been reported. It has been seen that ambient exposure to benzene increases risk of contracting cancers such as leukaemia. Several reports relate benzene exposure to a variety of lymphatic tumours. Chronic exposure to toluene during pregnancy can lead to disorders of the central nervous system, attention deficits and hyperactivity, mental delay and limb abnormalities in foetuses.

The study implicates coal-based stoves as the primary source of benzene. It indicates that vehicle exhaust is also to blame. Chakraborti says that reducing emissions from petrol-based vehicles will not reduce the concentrations of benzene in Calcutta as burning of coal in domestic stoves is primarily to blame. However, as sufficient studies have not been conducted in this area, evidence on the relative impact of vehicle emissions on benzene pollution is unavailable. Even unleaded petrol, which has been introduced in metropolitan cities, has high levels of benzene. Chakraborti's study calls for rigorous monitoring of pah s in the other metropolitan cities as well.