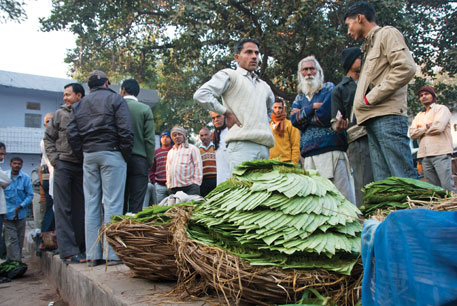 PAAN needs no introduction. From being a delightful end-of-the-meal treat to being used in religious ceremonies, the heart-shaped leaf is ubiquitous in Indian traditions. And with good reason—it is not just a mouth freshener but also has known medicinal properties. It forms an important component of ayurvedic medicine and has been used since ages to treat several ailments, like inflammation, headache, constipation and respiratory problems.

Now, for the first time, an international team of researchers from India, Mexico, Brazil, Denmark and the US has found that certain compounds in the dainty Piper betel leaf have antibiotic properties too. Two studies, published by the team in Integrative Biology on January 3 and in PLoS ONE on January 30, show how these compounds can be used to produce potent antibiotics against a broad spectrum of bacteria. The researchers have also identified novel targets in these bacteria that the betel leaf compounds can act on.

“The medicinal properties of Piper betel have been known since vedic times. But we have, for the first time, shown that specific compounds in paan leaf have broad-spectrum antibiotic properties and are effective even against several multi-drug resistant deadly pathogens,” says Debmalaya Barh of the Institute of Integrative Omics and Applied Biotechnology in Nonakuri, West Bengal, who led the research.

For their studies, the researchers used an integrative-omics approach consisting of substractive proteomics, comparative genomics, immunomics, reverse vaccinology, and in silico and in vitro drug discovery strategies to identify enzymes or proteins essential for the survival of the bacteria that cause cholera, diphtheria, tuberculosis, plague, hemorrhagic diarrohea and Caseous lymphadenitis, a disease in cattle. These enzymes and proteins could, therefore, be treated as effective drug targets.

Once the targets were identified, the researchers looked at several betel compounds to find out the ones that can inhibit the activity of these targets and kill the bacteria. They found piperdardine, one of the several antimicrobial compounds found in paan leaf, is very effective against all the pathogens and has a higher efficacy than currently used antibiotics like Chloramphenicol and Ampicillin. “This is the golden compound from Piper betel,” says one of the researchers, Nidia Leon-Sicairos of the School of Medicine at Autonomous University of Sinaloa in Mexico.

The researchers are now working further to establish Piper betel as a source of next-generation antibiotics for deadly infectious diseases. “Identification of the common targets and targeting compounds for so many deadly pathogens in one shot is a big achievement towards fighting against a whole list of diseases,” says Vasco Azevedo of the Brazilian team from Universidade Federal de Minas Gerais, Brazil.