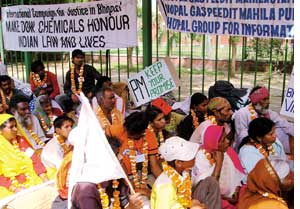 the pleas of the 50 survivors of the 1984 Bhopal gas tragedy, who reached Delhi on March 28, are far from being heard. Travelling over 800 km on foot, they came to the capital to remind the prime minister of the promises he made to them two years ago; but their demonstrations made little impact.

On April 16, 2006, ending a 21-day hunger strike by the survivors, the prime minister had agreed to meet their demands that included: setting up an empowered commission to implement social, medical and economic rehabilitation schemes for the survivors and their families, cleaning up Union Carbide's toxic wastes at the site, providing clean water to affected communities and taking legal action against Dow Chemicals that currently owns the Union Carbide factory in Bhopal.

The prime minister had also suggested setting up of a coordinating committee to oversee the rehabilitation schemes and environmental remediation measures. Hajira Bi, one of survivors, said the government did little. "A coordination committee was set up which met three times in the last two years, without providing any remedial action," she said.

Satinath Sarangi of the ngo, Bhopal Group for Information and Action, who is part of the delegation, says more than 5,000 tonnes of toxic waste lie at the factory site while 25,000 people living around it continue to depend on poisonous groundwater. "The government did not hold Dow, which took over Union Carbide, accountable," Sarangi said.

The delegation has met the prime minister's principal secretary T K A Nair. An activist who attended the meeting said Nair did not make any commitments but said the government is waiting for a report from the Union Ministry of Chemicals and Fertilizers and the Madhya Pradesh government on the matter. Nair refused to comment on the groundwater contamination at the factory site in Bhopal. He said the matter was sub judice.

cpi leader D Raja and Forward Block general secretary Devrajan who visited the protesters on March 31 said they would take up the issue in the parliament. Raja said he would ask union human resources minister Arjun Singh, who heads the Group of Ministers on Bhopal, to have a special discussion on the issue. Raja said the government has set aside Rs 14 crore to provide safe drinking water to the survivors.