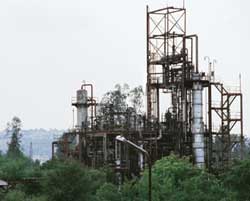 Closer to Reality by We for Bhopal 24 minutes

Bhopal is a living memorial to the world's worst industrial disaster. After 22 years, it seems that no lessons have been learnt from the tragedy. During this period, India has created the world's second largest chemicals industry. Meanwhile, the ghastly effects of the Bhopal gas tragedy continue. The crisis now enters a crucial phase as the poison slowly passes on to the next generation from the half a million crippled by the event itself.

So, it's encouraging when one reads this report and video documentation of the tragedy by a group of Delhi University students. Closer To Reality , both in print and video formats, is a journal of 14 students who have studied the after-effects of the disaster. These students call themselves 'We for Bhopal', and their initiatives mark the generational transition of Bhopal into the nation's conscience: from the generation of 1980s to the current one which has not experienced the aftermath of the disaster but grew up listening to its horrors. It helps. For, those who forget history tend to repeat it.

In the 22 years after the Bhopal gas tragedy, many groups have tried to keep the disaster alive in the nation's conscience. And they have been successful to an extent. But its in-your-face approach is what makes this video and report unique. The methodology is simple data collection. But figures are accompanied with stark visuals. The camera reveals the posters printed by workers of the Union Carbide factory to forewarn people of an impending disaster. Evidently, the employers paid no heed. Interactions between erstwhile Union Carbide officials and the filmmakers bring to light the fact that the training period of operators at the plant was cut substantially. The film features interviews with survivors in Old Bhopal, who seem to have spent a lifetime fighting for compensation and adequate healthcare.

The students' effort to document and disseminate their experiences should be treated as the crucial first step in their campaign. The final product may not stand scrutiny of cinematic or academic standards. But sometimes it's worthwhile to laud these small but important conscience-driven steps.