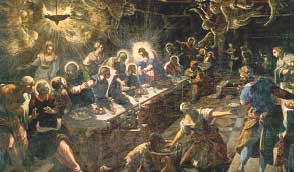 To explain the super-sized American fare, scholars have turned to an unusual source: artists’ renderings of the New Testament’s Last Supper. Their findings show servings are marching heavenward for 1,000 years.

Brian Wansink of Cornell University and his brother Craig, a bible sch olar at Virginia Wesleyan College, studied 52 depi ctions of the meal painted between 1000 and 2000.

Over the millennium, they found the entrees on the plates laid before Jesus’ followers grew 70 per cent and the bread 23 per cent. The apostles depicted during the Middle Ages appeared to be ascetics. By 1498, when Leonardo da Vinci finished his masterpiece, the party was lavishly fed. A century later, Mannerist painter Jacopo Tintoretto piled the food on the apostles’ plates.