Two ports proposed near the mouth of the Subarnarekha river on the Odisha coast have hit a road block after the state's forest department objected to them. The two sites at Talsara and Kirtania villages in Balasore district are within 10 km of each other and pose a threat to the endangered Olive Ridley turtles. The port at Kirtania has been awarded to Chennai-based Creative Port Development Limited (CPDL) to build and operate while the Bichitrapur port at Talsara is to be a captive port of Jindal Steel Works (JSW).

The Odisha forest and environment department has refused to grant clearance to the Kirtania project after the outgoing principal chief conservator of forest, S S Srivastava, went on the record saying the proposed ports would endanger the habitat of the Olive Ridley turtles. He brought this to the notice of the Odisha state environment department, through a letter dated October 15.

“Sporadic nesting of Olive Ridley sea turtles has been observed towards the north of the Subarnarekha mouth at beaches near Talsara and Kirtania. Carcasses of turtles have been noticed in beaches towards north and south of the Subarnarekha's mouth, including the proposed port area. This indicates there are congregations and mating of Olive Ridley turtles in the sea adjoining the Subarnarekha river mouth. The construction of the port and its channel and the movement of ships may disturb their congregation, mating and movement,” said Srivastava in his letter to the principal secretary of environment and forests.

CPDL had signed an memorandum of understanding with the Odisha Government on December 18, 2006 for setting up the port at Kirtania with an initial capacity of 10 million tonnes per annum (MTPA), which is to be increased to 40 MTPA in 10 years. The port developer entered a concession agreement with the state government on January 11, 2008 to build, own, operate, share and transfer (BOOST) the port to the state. As per the provisions of concession agreement, a special purpose vehicle, Subarnarekha Port Private Limited (SPPL), was incorporated on October 10, 2008. The port developer would share revenue with the state government at the rate of five per cent from first to fifth year, eight per cent from sixth to 10th year, 10 per cent from 11th to 15th year and 12 per cent for the remaining period of the concession. 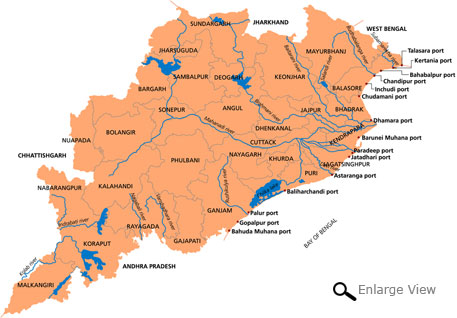 JSW plans a Rs 2,238 crore captive deep sea port in Bichitrapur and it will be used to transport cargo up to 10 MTPA in the first phase. The company had planned to invest Rs 550 crore in the first phase, which was scheduled for commissioning by 2013. The port's cargo handling was projected to reach 20 MTPA in the second phase, set to be operational by 2013 and 45 MTPA by 2020. JSW Infrastructure was to invest Rs 750 crore and Rs 938 crore in the second phase and third phase respectively. The port is to handle cargo such as coking coal, thermal coal, dolomite, limestone, iron ore, finished steel products, bauxite, gypsum and clinker.

The JSW port proposal is still in the initial stages. The company has submitted a techno-economic feasibility report to the commerce and transport department of Odisha, but it is yet to submit assessment reports on the social and the environmental impact of the project, say Odhisa state government officials.

The Union Ministry of Environment and Forests’ expert appraisal committee (EAC) has, meanwhile, pointed out that Talsara port is not “at all tailored to meet the weather conditions and other emergency situations (engine breakdown, for instance) while the vessels are passing through the proposed 26 km-long channel (along the coast), to be used for transportation of cargo to the sea.” EAC further observed from the environmenta impact assessment report of the company that “it is not evident (from the report) whether the opinion of navigational experts was obtained to assess the navigational issues arising out of a long approach channel (26km and above) in a less optimum channel width that too fully exposed to vagaries of nature in terms of wind, waves and currents both at the entry conditions under ballast  (for maintaining buoyancy level in the channel) and exit in fully loaded conditions.  A mere desk study alone may not be sufficient in view of the peculiar conditions that go with the project in its present form.”

Too close to defence installations

Even the Ministry of Defence has reportedly expressed concern over the site choice of these ports in close proximity to its missle testing facilities. The Defence Research and Development Organisation (DRDO) reportedly raised objections to the proposed ports, saying they will affect defence exercises, increasing security threats for the Integrated Test Range (ITR) at Chandipur, south of the proposed ports. The Odisha commerce and transport department reportedly said the identified ports cannot be compromised, if the proposed capacity of 400 MTPA cargo is to be achieved.

The Odisha government and the Kolkata Port Trust (KPT) are, meanwhile, locked in a bitter legal battle in the West Bengal and Odisha high courts after KPT decided to expand its limits for docking of ships 200 km south of Haldia  into the Bay of Bengal, which would cover an area of 28,646 sq km. The Odisha government had filed a petition against KPT, saying the port expansion would block the entire Odisha coast where seven ports have been proposed (see 'Odisha coast to be crowded with ports'). The Odisha High Court, on October 22, ordered KPT to maintain status quo. While the hearing in the West Bengal high court is yet to start, Gagan Dhal, Odisha's commerce and transport secretary declined to comment on the matter, saying it is sub judice.

Ranjan Panda of Water Initiatives, a non-profit in Odisha, expressed serious concern about the proposed ports affecting the coastline's ecology. There is no proper assessment of the ecological consequences after these ports are built on the coast, he says. “Creation of ports in such a close proximity of each other would lead to the destruction of the precious mangrove cover along the coastline, which are the only source of protection against cyclones and tsunamis,” he adds. Panda points out that the proposal to build ports runs contrary to the state government's plans to prevent sea ingress. The Odisha government has earmarked Rs 600 crore for this purpose. Building the ports will increase chances of sea ingress, he says. “By setting up ports at the mouth of the Subarnarekha, they would block the route of the excess water going towards the sea, especially during monsoon season, which could worsen the impact of floods,” says Panda.

Earlier, a report published by non-profit Dakshin Foundation—Harbouring Trouble:The Social and Environmental Upshot of Port Growth in India 2010—found three core problems with port planning in Odisha. First, the proposed ports on Subarnarekha were never mentioned in the 1996 study by the Indian Institute of Technology-Chennai, say the researchers, S Rodriguez and A Shridhar. But the Odisha government has been banking on this study for port planning in this area. The IIT researchers, according to Dakshin Foundation’s report, have said the area needs careful assessment. Second, the IIT-Chennai study did not consider the social and environmental impact of ports on the fishing and coastal communities of the ports. The whole length of Odisha coastline, as the report of Dakshin Foundation suggests, have the proposed ports which are close to or located near river mouths/estuaries with significant ecological value in terms of biodiversity, fish spawning and breeding grounds. The CRZ Notification, 1991 considers fish breeding grounds (estuaries and river mouths are known fish breeding sites) as CRZ – I (ecologically sensitive areas).
Web Specials Web Specials Web Specials Water Initiatives Union Ministry of … Subarnarekha river S S Srivastava S Rodriguez Ranjan Panda Olive Ridley turtles Odisha forest and … Kolkata Port Trust Kirtania port Jindal Steel Works (JSW) Harbouring Trouble:… Gagan Dhal Expert Appraisal … Defence Research and … Dakshin Foundation Creative Port … Bichitrapur port A Shridhar
SUPPORT US