A recent meeting on biological diversity failed to establish ground rules for implementation, as the participating nations were totally unwilling to yield. 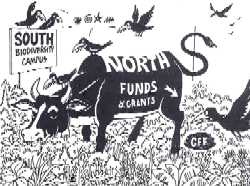 THE BIOLOGICAL Diversity Convention meeting, which was held in Geneva from October 11 to 15 and attended by representatives of 130 countries, failed to establish ground rules for its implementation because most countries gave priority to their own interests. Consequently, the governments have asked for two more meetings to be held before the first meeting of countries party to the convention, which is expected to be held in 1994.

The convention will, nevertheless, come into force on December 29, as it has been ratified by the required number of 30 countries. India is also expected to ratify the convention soon.

The convention was expected to be an important lever in reforming the way business is conducted globally so as to reduce its adverse effects on biodiversity. Article 5 of the convention requires nations to cooperate on biodiversity related issues of an international nature.


The Third World was, however, reluctant to push to the top of the agenda the issues that bother them most, such as intellectual property rights and the sharing of biotechnological benefits. Industrialised countries, on the other hand, pursued the institutionalisation of the implementation of the convention's aims, which would gradually reduce the options open to developing countries to discuss issues important to them.

The industrialised countries pushed through the establishment of the Interim Scientific and Technical Advisory Committee (ISTAC) to advise governments on issues such as funding criteria and developing research agenda. Under the convention, ISTAC is to be set up at the first meeting of the parties to the convention.

This urgency on the part of industrialised countries prompted the developing countries to express their apprehension that ISTAC would be dominated by the North, thereby reducing their influence.

The UN Environmental Programme (UNEP) was asked to convene the first meeting of ISTAC early next year. Though it would dilute ISTAC's role as a small workable committee of experts, it was decided to keep the meeting open to all governments.

ISTAC's formation will prevent developing countries from keeping the convention's agenda open-ended and hinder them from taking up issues such as equitable sharing of resources or compensation for past exploitation of their plant wealth.

Industrialised countries were unwilling to yield to the Third World, who objected that the Global Environment Facility (GEF) is becoming the sole mechanism to finance biodiversity projects. Even the recent, damaging evaluation of GEF did not help the Third World, though the Washington-based Environment Defense Fund representative said, "The evaluation is a devastating critique of the ability and competence of GEF in financing environmental projects and programmes, particularly with respect to biodiversity."

Industrialised countries felt secure only when investing in a World Bank-controlled fund and are averse to investing in any fund controlled by the one-country, one-vote UN. Developing countries, however, favour the latter. Nevertheless, the deadlock is not preventing funding of any projects. An UN official said that while no discussion has taken place on funding criteria, GEF is already financing projects in the same manner as before, with no attempt to integrate biodiversity conservation in national development policies.

But the developing world considers GEF only a part of the mechanism for sharing biotechnological benefits. As the Centre for Science and Environment's (CSE) statement mentioned in Geneva, "The policy on patents will be far more important in channelling the flow of funds to developing countries than GEF grants."

CSE criticised UNEP for playing this issue down by stating, "...patented technology may play only a small role in the general equation of benefit-sharing". It claimed UNEP's assertion was not correct as most research in biotechnology is now done by the private sector.