The ambitious solar mission is set to start on shaky ground 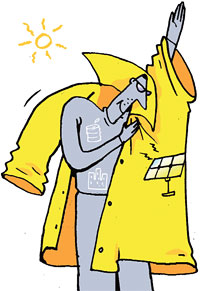 BIDDING for the first phase of Jawaharlal Nehru National Solar Mission has put a question mark on the ambitious target set to augment the country’s energy needs through the solar route.

Of the 30 short-listed bidders, almost 20 have had nothing to do with solar photo voltaic (PV) power. Some have dealt in animation, real estate and infrastructure. Many grabbed the bids to get tax breaks and the projects they promise may soon turn unviable.

Experts say the Indian solar power story has become a bubble that could burst anytime. By 2013, the government aims to add 1,000 MW of solar power to the national grid—500 MW of which is solar thermal and 500 MW solar PV. Of the 500 MW solar PV, the first bid stipulates a production of 150 MW, which looks an uphill task given the total current output of 12 MW (see ‘New gold rush’, Down To Earth, June 15-30, 2010).

During the past few months, a rat race has been on among the solar power wannabes to grab the benefit of the sunrise sector. These companies are willing to change the proposed tariff to serve their interest.

The feed-in solar PV tariff for 2009- 10 was Rs 18.40 per unit. Due to falling equipment prices, the Central Electricity Regulatory Commission (CERC) proposed a tariff of Rs 16.60 per unit for 2010-11. In February, solar energy players cribbed before the CERC that the tariff was too low. The commission gave in and revised the tariff to Rs 17.91 per unit in April.

The bigger game became evident in November. To ensure that they were short-listed for the solar mission’s first phase, the companies gave tariff discounts up to 30 per cent with the lowest bid at Rs 10.95 per unit. More than 300 bids were received and as many as 30 got selected.

“Discount of up to 20 per cent is factored in with cheap foreign finance and decreasing prices of equipment. But a discount of 30 per cent will make the project unviable,” a solar project consultant said.

International prices of solar PV equipment—that constitute about 60 per cent of the cost—have fallen after the CERC announced a normative capital cost of Rs 14.42 crore per MW for the year 2011-12.

This is a major reason for the big discounts. Moreover, the CERC tariff factors in a 12 per cent interest rate on loans, while European and American funding agencies are eager to offer cheaper loans.

Experts think companies are ready to settle for lower profits to enter the market. “The target of ramping up gridconnected solar power from the 12 MW to 1,000 MW by 2013, and 2,000 MW by 2022, has elicited a strong response because companies want to have the first-mover advantage,” said Indrapreet Wadhwa, president of Solar Independent Power Producers Association and CEO of Azure Power.

Asked if the discounts were viable, Deepak Gupta, secretary, Ministry of New and Renewable Energy, said, “Bidders must have bid with their eyes open. They would not want to lose their guarantees.” For example, a company that would offer a tariff of Rs 11.91 per unit would have to provide bid guarantee of Rs 15 crore.

The new power producers could resort to using poor quality equipment to save cost. A solar technology expert quoted the analysis of Mercom Capital, a clean energy market intelligence service company: “As evident in Spain and other countries, lack of expertise and qualifications among project developers can lead to poorly executed projects, producing at much lower capacities.”

While one of the objectives of the solar mission is to support indigenous industry, the government may postpone mandatory use of locally made PV cells in solar power projects. This may allow entry of cheaper foreign technology. “We will consider mandatory clause for PV cells only after evaluating progress on projects that have been bid in the first round. If need arises, we may postpone its implementation to allow more global technologies to enter the Indian market," Gupta was quoted as saying in newspaper reports.