Most of the permits to pollute set up for auction by the US Environmental Protection Agency could not be sold, as the bidding failed to reach the designated minimum price. 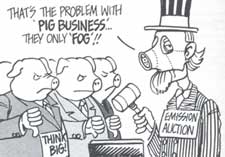 IN SPITE of receiving 150 bids, the response to the first-ever auction of pollution rights, organised recently by the US Environmental Protection Agency (EPA), is termed poor. The 150 bids are a benchmark in the US agency's market-based strategy to reduce acid rain. Most of the allowances offered by private companies were not sold because they failed to reach the minimum price.

The EPA has granted permits for the emission of sulphur dioxide -- the gas that causes acid rain -- to 110 major polluters. Companies are permitted to trade excess allowances to firms exceeding their pollution limits.

Most of the bidding at the EPA auction, conducted by the Chicago Board of Trade (CBoT), came from electricity- and coal-producers. But one bid was submitted by the National Healthy Air License Exchange, a Cleveland-based environmental group.

Its president, David Webster, says he submitted bids for 1,100 permits, each permitting emission of 1 tonne of sulphur dioxide per year. Webster says his group will allow the rights it acquires to expire unused, so as to prevent vast amounts of the gas from polluting the atmosphere.

CBoT wants to start an electronic spot market in pollution permits and develop it into a futures market.

The auction plan has both political and environmental support in the US, where it is seen as a cost-effective alternative to regulations. Vice-president Al Gore predicts auctions will lead to other market-based methods to prevent environment degradation. It could also force companies selling smokestack scrubbers, which reduce sulphur dioxide emissions, as well as those selling coal with a low sulphur content, to revise their marketing strategies.