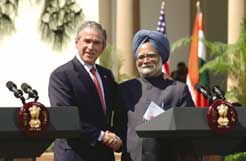 ndia appears to have managed to ward off an impending nuclear fuel crisis. On March 2, 2006, New Delhi settled its differences with Washington over the highly controversial nuclear separation plan. An agreement on the bifurcation of civilian and military nuclear facilities during George Bush's visit meant the removal of a sore point that almost derailed a bilateral nuclear cooperation pact the two countries signed on July 18, 2005.

The bifurcation of nuclear facilities was a contentious issue for the Indian department of atomic energy, whose operations have been cloaked in secrecy. At the same time, a nuclear accord with the us was eagerly awaited by India to end its nuclear isolation since it refused to sign the 1968 Non-Proliferation Treaty (npt). The country's nuclear establishment is also awfully short on funds and fuel to pursue its expanding nuclear ambitions.

As per the agreement, India will open 14 of its nuclear reactors (nearly 65 per cent of the installed capacity) for international scrutiny. However, the prototype fast breeder reactor being built in Kalpakkam, near Chennai, will be exempt (see 'No bullying', Down To Earth, February 28, 2006). The agreement will now be presented to the us Congress for approval.

The us, too, had been keen to rope in India on the nuclear front since India is the only recognised nuclear power (amongst those who have refused to sign the npt) outside us influence. The other two Pakistan and Israel -- are known allies of the us . Getting India on its side will give a boost to Bush's war on 'nuclear rogue' states such as Iran and North Korea.

More importantly, the agreement may help revive the us nuclear power industry weighed down by environmental and safety concerns.

During the visit, Bush promised that he would push for changes in us laws and Nuclear Supplier Group (nsg) to ensure full implementation of the civilian nuclear deal with India.

nsg, a group of countries that exports nuclear fuel and technology, was formed soon after India conducted its first nuclear tests at Pokhran in 1974. The deal has opened India's channels of communications with nsg countries like France, Russia and Australia. This could be a signal for them to start similar negotiations with India.