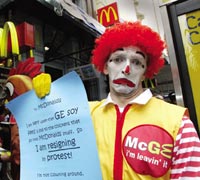 In the wake of strong protests by activists and pressure groups, fast food giant McDonald's has decided to source only non-genetically modified (gm) feed for its chicken products in New Zealand. Earlier, the protestors launched a four-week public campaign targeting McDonald's stores throughout the country.

Now, Inghams (the supplier of McDonald's poultry) has stated that its next two shipments of soya meal will be sourced from a non- gm-contaminated region of Brazil. New Zealand's largest poultry producer, Tegel, has been sourcing a high-standard supply of non-gm soya from the us since 2001. This comes at a premium of up to us $30 per tonne. Inghams is not prepared to pay the extra amount and prefers less costly, non-gm Brazilian soya.